The Pediatrician and the 'Pop

As usual, I was awash in waves of germ anxiety.  I hate bringing my kids there when they are well.  I just know they are going to touch something and pick up the latest round of Ebola, Swine Flu, or whatever nasty sh*t is floating around the ATL.

Today's biggest enemy wasn't the unwanted germs, though.  It was the giant bucket of Dum Dums that are prominently placed on the check-out counter.  My kids already know they are there as Big E talked about it the entire drive to the office and he wasn't even being seen by Dr. K.

There really is no way to avoid it.  It's crowded.  There are gobs of snotty kids wandering about.  I could say no but that would result in an atomic meltdown and I'm just not prepared to handle that and check out.

I would also like to point out the obvious.  Our country is the midst of a childhood obesity epidemic, so maybe stickers would be a better alternative to candy.  Even our haircut place hands out toys instead of candy.  HELLO?!

Anyway, I begrudgingly let the Yoys pick out lollipops. They are as happy as can be.  I'm already annoyed that this is happening.  Next up, sticky hand hell.

I decide to make the Yoys eat their pops in the lobby of the building as I don't want my beloved van covered in a layer of Dum Dum glaze.

Little E begins drooling.  I didn't really notice it until it dripped on my toes.  His belly was covered with streams of sticky spit.  Pools began forming on the floor.  I caught a glimpse in his mouth and noticed he had hardly made a dent in his Dum Dum.  We could potentially be here until 2013.

So I did it.  I pulled it out of his sticky paws and chucked it in the trash.  I attempted to wipe down his hands, arms, and face but he was too busy going bananas.

Everyone entering the building glared at me.

WHAT DID YOU DO TO YOUR SCREAMING CHILD?

I took a deep breath.  I will get through this.

I picked up a semi-glossed Little E and grabbed Big E's hand.  Why didn't I bring a stroller again?  We made our way through the Piedmont maze to the parking deck.

Little E continued screaming.  His lollipop screams gave way to walking screams.  He wanted to get down and walk, which was never EVER going to happen here.  He wiggled in my arms and I repositioned him to the football hold.  He screamed louder, if that is possible.

I promise you, an older gentlemen using a walker stopped, turned to look at the commotion, and waved us by him on the narrow sidewalk.

He weakly smiled at me as I passed by.  I was holding back tears.

We safely made it to the car and I had to sit for a few minutes to compose myself.  I was in no condition to drive.  Except maybe straight to a local bar for a mid-morning drink (just kidding, maybe).

This whole event could have been avoided if the lollipops were not in plain sight.  I disagree with having them there at all, but if you are going to have them, maybe keep them in a desk drawer and ask (or spell) the parent if they want their kids to have candy. 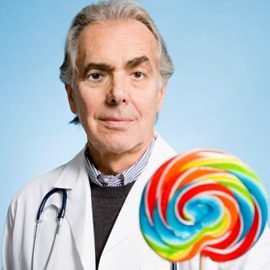 What is up with this?