Big E: In Need of Some Bubble Wrap

As I mentally prepared for the amount of packing I need to do, I let my mind wander to things beyond my control.

WHAT IF BIG E COMES DOWN WITH A NASTY VIRUS AND WE CAN'T GO?

I seriously contemplated holding him from school today.  But who are we kidding, right?

Little did I know, it wouldn't be some plague at school that would be Big E's undoing.

The boys awoke extra early this morning.  Apparently, they wanted to make the most of the last day of the world.  Big E, in all his rapture, ran full speed into the banister post.

He came running into our bedroom silent crying.  Finally, I was able to extract from him the details of his story.

It was pitch black so I couldn't tell if he was bleeding.  And there was no way in hell I was turning the light on.  So we did what good parents do, we used the light from our cell phones to determine the extent of Big E's injury.

It was a shot to his eyelid.  And it was bleeding.  I patted it a few times with a kleenex and assured Big E he was fine.  Just call me Dr. Yoy.

Only in the morning light did I notice the swelling and light bruise.

Oh, that would be the Yoys.

Sigh.  There goes our family pictures. 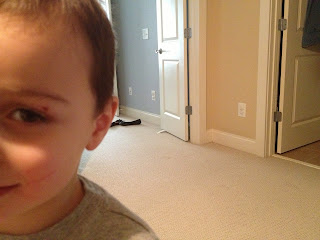