Yesterday I took both Yoys to the dentist for a cleaning.

Big E earned two coins to put into the toy vending machine as a reward for sitting still during his x-ray and cleaning.

Little E earned zero coins.  Not because of his abhorrent performance, but because the toys can be small and they don't want a two-year-old choking to death in their office.  Little E instead received a tub toy.

That didn't mean Little E wasn't interested in the toy tower, because he only had eyes for it.  I thought for sure we'd have a war on our hands once Big E retrieved his two, much cooler toys.

But then something weird happened.

ONE FOR ME AND ONE FOR LITTLE E!

Big E handed over the ball without hesitation.

I wanted to run up to Big E and hug him for being so sweet to his brother, but I didn't want to make a big deal out of it.

THAT MAKES ME WANT TO GIVE MY SON A BROTHER! - The Receptionist

My kids were actually providing the opposite of birth control.  I can guarantee you that has never ever, ever happened.  Ever. 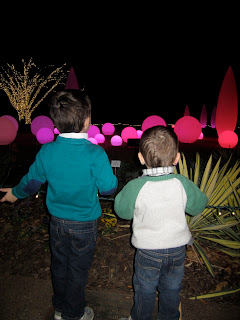