Big E: Thanks for the Public Urination Ticket

On Saturday, we made the long trek down to Orlando.  We broke up the drive with a pit stop in Gainesville, so we could introduce the Yoys to the glorious campus of our Alma Mater, UF.

Mr. Yoy and I were militant about getting Big E to use the potty and we had, thus far, avoided a pee-castrophe.  For insurance purposes only, we had also put a pull up on Big E.

As we weaved our way through Lake County, we heard the SOS call from the back seat.

I asked Big E to squeeze it tight and that we would exit the Turnpike ASAP.

As luck would have it, the next exit approached quickly.  There was just one problem.  You needed to have a Sunpass or exact change, there was no one manning the exit.  It turns out, the Yoys had neither.

As we waited our turn to approach the toll, Mr. Yoy and frantically searched our car, pockets, purses, behind our ears, anywhere you could imagine loose change.

SH*T SH*T SH*T, our pit stop was going to cost us a ticket.  If you run the GA 400 toll, it costs you like $20.  I was beyond upset with Big E as we had asked him thirty minutes earlier if he needed to use the restroom.

I know I could have let him pee in his pull up, in his car seat, but when we tried this in the NYC cab, he peed through his pants.  I did not want a urine soaked carseat cover for the remainder of our trip.

The tour bus in front of us was also having toll money issues.

Big E's pleas to use the restroom were escalating.

There was no one currently behind us, so I popped out of the van, pulled Big E out of his carseat and plopped him onto his portable toilet.  We pulled up to the toll and discovered we could grab an envelope and mail into the state a check for our toll.

So one problem was solved.

Now we had a kid on the crapper in the backseat as Mr. Yoy rolled slowly along the exit ramp until we could safely pull over. 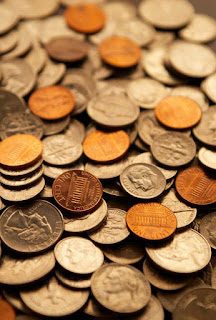 Where were you when I needed you?