Little E: Nightmare On My Street

This could be the opening scene to every terrible horror movie ever made.  Or it could be my sweet boy, Little E, telling everyone he encounters about our newest resident.  In his creepy little kid voice.

His teacher told me about it first.  She pulled me aside to tell me how clearly he had described our ghost.  The hair on my arms stood up.

As I walked him home through our neighborhood, I tried to justify his story.

IT WAS PROBABLY A BAD DREAM.

HE SAW IT ON SOME SILLY TV SHOW.

But my sensibility, which I pride myself on, had quickly dissolved into hysteria by the time we turned onto our street.

OUR HOUSE MUST BE BUILT ON AN OLD BURIAL GROUND!

HOW WILL I EVER SLEEP AGAIN?

I didn't say anything to Little E about it.  Instead, I watched in amazement as he relayed his story to anyone that would listen.

Mr. Yoy thinks we are being haunted by the Ku Klux Klan (said ghost WAS wearing white).  They respectfully request that we return to New York, or wherever our kind hails from.

I'm praying we are being haunted by the great imagination of a three year old. 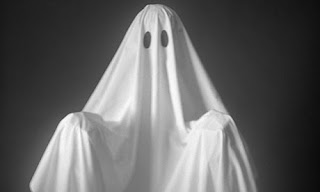 I better not run into this guy on a middle of the night water run.