January 07, 2015
Wednesday. Day four of no walking for Little E.  Day four of me carrying the sad sack everywhere.

I held him from school again and Mr. Yoy and I spent the morning trying to get him to take some steps.

He was hysterical and begging me to help him. I had to look away as I was becoming visibly upset.

Little E was getting no better, so I called the pediatrician.  We went back in and she got him to stand unassisted on the exam table claiming it was a "magic" table.  It worked!

But he was still unwilling to take steps.  I think he's scared.

Dr. K referred us to a pediatric orthopedist and I made an appointment for tomorrow morning.

He scooted around the hardwoods for most of the afternoon.  It was like having a baby again.

After dinner, I was cleaning up the kitchen when Little E came walking in, very nonchalantly, to show me his hex bug toy.

LITTLE E!  YOU ARE WALKING!  DOES IT HURT?

It's a miracle! Relief flooded my body.  I had held myself back from googling his symptoms on the internet, but it was getting harder to keep those dark doubts from entering my mind.

I still plan on taking him to the doctor tomorrow morning.  Unless he awakes doing jazzercise or some other crazy sh*t. 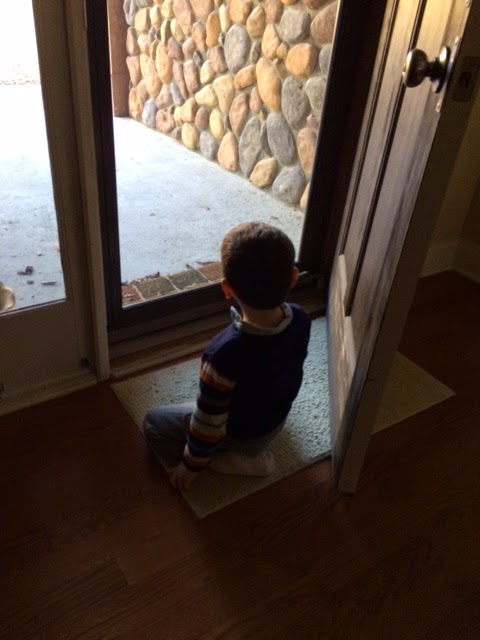 Waiting for the bus to drop off Big E.