The Yoys: A Traveling Sh*t Show

January 06, 2015
Sunday we awoke early to head over to the Magic Kingdom for a day of happiness and sweet family memories.

I woke with a touch of intestinal distress.  That's as descriptive as I'm going to get about that.  If you want all the gory details, call me.

We were rushing to make a 7:45 breakfast reservation.  As we unloaded the Yoys in the parking lot, Little E wanted to immediately be placed in the stroller.  He complained that his knee was bothering him, but we just chalked that up to him being one of the laziest kids on earth. I threw him in the stroller and we ran in.

Once inside, I had Mr. Yoy grab some Imodium AD from the Polynesian gift shop before we headed into breakfast with Lilo & Stitch.

I made it half way through breakfast before I had to make a break for the bathroom.  I downed more Imodium.

Little E continued to limp around breakfast, but mostly hid under the table when the characters arrived at our table.

And still, with one kid limping and one mommy tied to a toilet, we dropped $500 on tickets into Disney.  Because we are optimistic fools.

The Yoys lasted until around noon.  Sweating and queasy, I raised my white flag.  I surrendered.  We did manage to take a few photo ops (where I looked amazingly thinner), ride a few rides, and eat popcorn.

By the time we arrived back at Mr. Yoy's parents' house, I was feeling much better.  We packed up and decided to drive home that afternoon, instead of waiting until Monday.  Little E was not walking at all.  We had to carry him everywhere.

We hit the road and made it to Gainesville around 6pm.  Just in time for some dinner and gas.  My stomach was growling so I took a gamble and ate a turkey sandwich.

We got back on the road, this time I was driving so Mr. Yoy could take a cat nap. By 7:30 it was all over.  We stopped at every dirty, seedy, horrible bathroom place you could think of from Alachua to Atlanta.  I was sick as a dog.  I downed two more Imodiums.  Nothing was helping.

We made it home around 11:45.  I've never been so happy to see my bathroom in my entire life.

The Yoys transferred to bed and Mr. Yoy and I passed out.

Monday morning came fast with Little E yelling from his bed to help him out.  He was still not using his right leg.  We headed to the pediatrician first thing, and she sent us over to the CHOA for x-rays and blood work.

The x-ray technician at CHOA was Hollywood handsome.  Of course he was. Because 1) I hadn't showered in a few days 2) Was sick to my stomach 3) Wearing a sweater that was past due for the dry cleaner.  I pretended I didn't look like an extra from The Walking Dead as I pushed Little E into the x-ray room.

Little E was a champ through it all.  He was diagnosed with a viral infection that went into his hip and knee joints.  He is still not walking, but I'm hoping when he wakes today he will be feeling better.

Happy New Year from the Yoys!  We had a crappy start, but things can only get better from here! 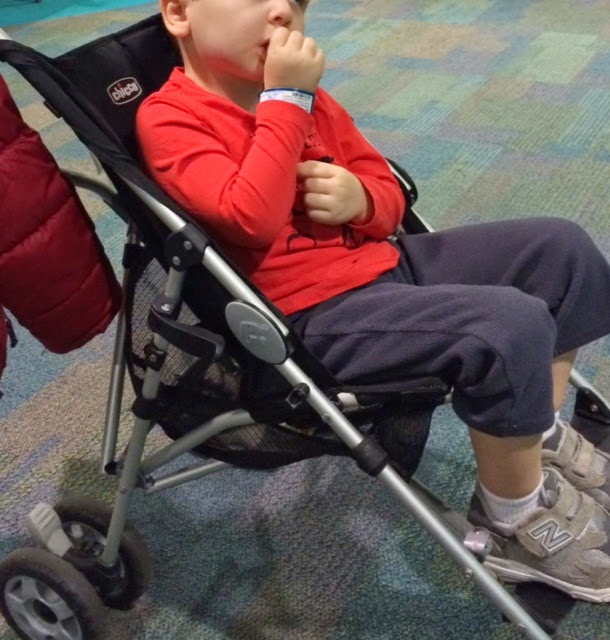 Little E waiting to be seen at CHOA.