January 23, 2015
The Yoys are avid Spotify users.  We each have our own playlist, including Little E. Typically, we all live in peace sharing our one Spotify account.  Tonight, Big E cranked up his playlist so he could listen to some Kidz Bop 27 while he bathed. Mr. Yoy had other ideas.  He was listening to Spotify at the office.

Mr. Yoy had his iPad with him, so he was able to change the music we were listening to remotely.  And this about rocked my kids' worlds.

The majority of the music on Big E's playlist is Halloween themed.  Some of it is quite creepy.

His music kept jumping around.  Big E could not understand why the songs were changing.

I innocently suggested this hoping it would cure Big E of his nightly Kidz Bop routine.  That music is killing my soul.

Mr. Yoy called to see if we had figured out what he was doing, besides not working.

I had, but Big E was a little freaked out.  He came over and sat next to me and peeked at the computer as it bounced from one bad song to the next.

Mr. Yoy could not resist the temptation to fool the boys.

As Big E spoke to his dad on the phone, Mr. Yoy fueled the fire by vehemently denying all involvement while simulataneously playing I ALWAYS FEEL LIKE SOMEBODY'S WATCHING ME.  He followed this up by some instrumental haunted house music.  Think lots of wind and rattling doors and chains.

Big E's bottom lip began to quiver.  Little E cried in fear as he bathed in his own filth.

And just like that, GNR's DON'T YOU CRY TONIGHT mysteriously began playing.  I, of course, was laughing hysterically, because I'm a terrible human.

OK, DADDY, I THINK THE BOYS HAVE HAD ENOUGH.

I tried explaining that it was Mr. Yoy changing the music, but they didn't believe me.  In fact, once Little E stopped wailing, he himself took credit for the incident.

As we lay in bed reading, the ghost questions persisted.  Little E was sure it was the ghost that he'd seen in our stairwell late one night that had been changing the music.

I THINK I'M GOING TO STAY UP ALL NIGHT, YOU KNOW, JUST IN CASE.

Big E's words struck fear into my heart.  I needed this kid to sleep.

I'M MAD AT DADDY BECAUSE HE LIED TO ME AND THAT'S USUALLY MY PART. 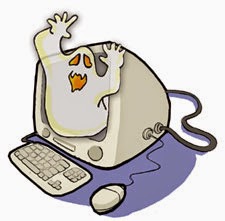