February 10, 2016
Saturday I took the boys to a birthday party at an indoor trampoline park.  It was Sky Zone, but who's pointing fingers?  Certainly not Mrs. Yoy.

We've been to one of these places before, during a weekday.  When it didn't appear that every metro Atlanta child under the age of ten was in residence.

I really enjoyed the trampoline park during our first outing.  With the exception of the ultimate betrayal of my bladder each time I jumped, it was a great workout and the boys were dead tired when we left.

Thank goodness, the birthday party had its own roped off area the kids could jump in.  I didn't have to worry about some sugar drunk thirteen year old landing on my child.  I just had to worry about my own child landing on his foot.  His left one to be precise.

Big E hopped over to me and said his foot hurt.  He sat down and we inspected it. There was nothing glaringly wrong with it.  No bone sticking out between his toes.  He felt fine enough to re-enter the trampoline and bounce around on one foot.  It was like watching Kerry Strug all over again.  Except Big E did NOT stick the landing. 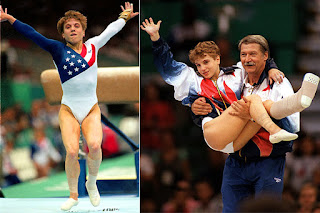 I carried him around the remainder of the party (while silently thanking the lord that Big E is the size of an elf) and when we got home I iced it, elevated his foot, and pumped him full of children's Motrin.

He woke up a few times during the night complaining of pain, so at 6:30AM on Sunday morning, I decided to head over to CHOA to have his foot looked at.  I figured I'd beat the rush.

I would like to note that I had been out late the night before and I didn't end up getting to bed until after 1:30.  If there was such a thing as a fantasy mom league, I'd totally be winning.

Big E did end up having a foot sprain, but there wasn't much they could do for it.  The doctor suggested going to CVS to buy an ace bandage to wrap Big E's foot as CHOA would charge us ~ $1,200 for it. She recommended not using crutches because for a seven year old boy, crutches would most likely do more harm than good.**

Big E milked his injury all day Sunday.  He laid on the couch watching movies and taking his meals and begging for drugs like any good addict.

By Monday, I felt he was ready to start putting some weight on his foot, but he refused.  He cried.  It was hurting him so badly.  I was in no mood for a battle, so I let him stay home from school.

When my kids stay home from school, I try my best to make it the most unfun day of their lives.  No TV.  Lots of reading and sight words. Only veggies and healthy foods to eat.  I want them to understand that being home sick is not a life vacation and I want to discourage any sort of illness faking. 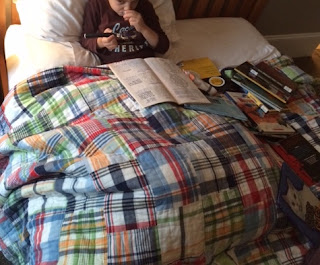 Big E was helping me fold laundry on the floor of my bedroom.  My mom called to check on him.  I put the phone on speaker and handed it to Big E to talk.  He shook his head no, smirked, stood up, and RAN his lying a** down the hallway.

**All little boys have the ability to turn the most mundane of objects into a sword or a gun.  Spend a moment watching them.  It's fascinating.