My parents have moved about five times since the house where my brother and I grew up in.  There isn't a lot of our old stuff laying around.  My mom gave us the chance to come home and take the mementos from our childhood, the rest was gone faster than you can say:

I JUST CAN'T DECIDE IF I WANT THIS LIFE SIZED GUMBY DOLL WITH BENDABLE LIMBS?!

My diary, my Joey McIntyre posters, and my endless high school picture collages got the thumbs up.  So did my giant Madame Alexander doll collection.

Yes, that's right.  I had thirty dolls with soulless eyes staring at my every night as I fitfully dozed off into my teen angst ridden dreams.

It was creepy as hell.  I didn't realize it at the time, but now that I have had time to digest my childhood, I've seen the light.

So you can only imagine my surprise when my dad brought in a black garbage bag from the garage.  Inside contained the B team of my scary doll situation. They weren't in pretty dresses or wearing ballet shoes. They were tokens from my parents and grandparents' trips abroad.

I quickly gravitated to the one I dubbed the Russian Rabbi. 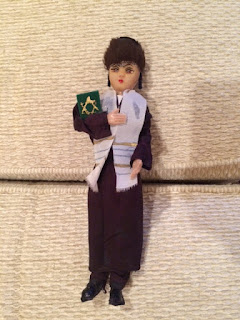 My mom debated whether it, in fact, came from Russia or Israel, but it didn't matter.  I'm pretty sure it came from hell. Or China.

This guy was in my bedroom for the majority of my childhood and I didn't think TWICE about it.

We laughed about it, and my mom asked if I wanted to keep it.

And that's when it hit me.  Like a big-a** bolt of lightening.

As Jews, we are eliminated from using the Elf on the Shelf to bribe our kids into stellar behavior for the month of December. And I know about the Mensch on the Bench, but a Mensch is too nice for what I'm trying to accomplish.

I innocently called the boys over and introduced them to the Russian Rabbi.  He was going to live in their bedrooms like he had mine and report back to me all the terrible choices they were making when I wasn't around.  Or else he was maybe going to murder us all in our sleep.  Who knows for sure...

Little E began screaming as I gave the Russian Rabbi a really creepy voice.  It was pretty much the best parenting idea I've cooked up in a very long time.

Every breath you take, he'll be watching you.