MUST. POWER. THROUGH. AGAIN.

September 12, 2012
Last night was another epic night at our home.

This time it was Little E who garnered the title of Worst Behaved Yoyser.

At 3:49 AM (precisely two minutes earlier than his older brother the night before), Little E woke up Mr. Yoy by screaming for MAMA!

I, of course, didn't hear sh*t because I had settled nicely into my sleep deprived coma from the prior evening.

Mr. Yoy alerted me to Little E's screaming.  And by alert, I mean a nudge to the rib.

I threw on my glasses, my superhero cape, and went dashing down the hall.  Little E is my good sleeper.  He rarely makes a peep between the time I put him down and the time I get him up.  I braced myself for the worst.

I flung open his door and grabbed him.  He was pee, poo, and vomit free, so that was a plus.  He was just upset.  Maybe it was night terrors.

I calmed him down and put him back to bed.

Sleep was not on Little E's schedule.  I was not aware of said schedule.

I repeated the crying/calming/bedding cycle three more times before I waved the white flag. We were going on an hour of crying.  I prayed Big E did not get up to use the bathroom.

I made the executive decision to turn on the television (again).  I hate this and have tremendous feelings of guilt, but my desire to sleep overrides my desire to be mother of the year.

Little E quiets down temporarily, but I cannot fall back asleep because I hear Little E sneaking towards Big E's bedroom.  He wants to play with his big brother.  Normally, I'm on board with this.  At 5:30 AM, I say let's not wake the sleeping giant.

So I move Little E into the guest bedroom with me.  I pull an extra blanket down from a shelf in the laundry room and simultaneously pull down an old dust buster and a can of spray starch.  I scare the living sh*t out of Mr. Yoy.  Sorry for that.

Little E spends the next hour and a half climbing over me, talking, and doing everything in his power to keep me awake.

I concede my second night in a row of waking at 4 AM.  This is awesome.

At one point, Little E climbed on my chest in an attempt to kiss me.  But he crossed his eyes and did this awkward lip pursing thing. In my exhausted delusional state I wondered how Jamie Foxx's Wanda had made it into the guest bedroom.  Should I laugh or cry?

Around 7, Big E came out of his room and the day began anew.  Big E was so proud of himself for staying in his bed all night.

I mustered up a weak encouragement.

Mr. Yoy and I played the who was more tired contest.  I thought I should win.  So did he.

Somehow, I managed to get the Yoys dressed and fed and off to school.

I skipped out on my Weight Watchers meeting this morning, because after eating a tray of brownies on Saturday night I was looking for a good excuse not to go, and crawled back into bed.  And slept.  For an hour of uninterrupted, quiet, relaxed sleep.

Now I'm just watching the clock.  Four hours until bedtime.  I will survive.  Because I have to. 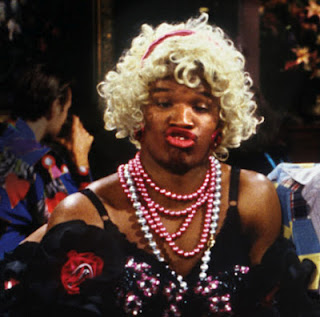