May 26, 2013
What is it with Sundays and sushi?  Every Sunday my kids want sushi and our regular joint is closed.

Tonight we went to the Maki Fresh in the Peachtree Battle shopping center.  This is certainly not the first (or even second or even third) story that centers around this shopping center to make the blog.

Big E took a break from dinner to take his usual public poop.

We had a birthday party earlier in the day and this kid housed a mountain of junk food.  Even I was impressed and I can put back some serious quantities of non-Weight Watchers friendly food.  So I was not shocked by what happened next.

This was the warning shot.  I figured he probably had to use the bathroom again, but he declined.  Instead he rubbed his buddha belly.

We decided to walk the length of the shopping center.  It was nice outside and we were enjoying the stroll.  Except we strolled our way straight to the Baskin Robbins.  We ordered the boys kiddie cups.

Big E made it about two bites in and declared he had to use the restroom again.

Mr. Yoy headed out to walk Big E back to the restaurant.  BR did not have a public bathroom.

I sat with Little E while he ate his ice cream in super slow-mo.  I aged about ten years as he picked his way through his cup.  I wiped him up and headed out the door.

As soon as we stepped outside I heard it.

I saw Mr. Yoy and Big E hanging out on the sidewalk on the opposite end of the shopping center.

I could sense the panic in Mr. Yoy's voice.

I grabbed Little E's hand and dragged him towards the other half of our family.

There, on the sidewalk, was a giant steaming pile of sh*t.

Mr. Yoy was white as a ghost.

Apparently, Big E decided once they were walking that he didn't need to go.  So they continued beyond the restaurant while they waited for Little E to finish his ice cream.  It was a great plan until it wasn't.

HE JUST DROPPED HIS PANTS AND DID IT.  I CAN'T BELIEVE THIS JUST HAPPENED.

Mr. Yoy was suffering from post traumatic stress disorder.  He had no cell phone on him, no wipes, nothing.  He was stuck guarding the poop and directing people around it.  Big E's pants were still down as he needed a good wipe.

Being the epitome of a mature and nurturing mother, I tried my best not to burst into laughter/tears.  I pulled it together, though, and began the cleanup process.

I threw a bunch of wipes over the steaming pile and had Mr. Yoy run to Publix to grab some plastic bags.

Big E seemed completely unfazed.  Which I guess is good.

I wish I could say the same for Mr. Yoy. 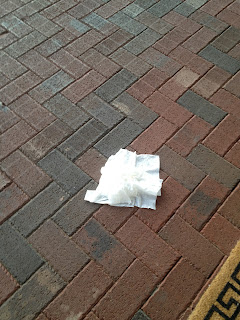