The Yoysers: Sink or Swim

The teacher is great, but she doesn't take any crap.  She had Big E swimming in four, thirty minute sessions.

I was one impressed Mrs. Yoy.

This year, it was Little E's turn to be indoctrinated into the "dunk club."

Big E was slotted to go first at 3:30.  He walked right up to Miss C and began chatting her up.  I hadn't told him why we were at the pool and he didn't seem to recognize her.  Initially.  Then the light went on.

And he was off.  Big E bolted up the stairs, flung open the gate to the parking lot, and went for it.  I grabbed him moments before he hit the street.

So like a lamb to the slaughter, Little E went first.

As soon as Miss C baptized his Fred Flintstone feet in the pool, the wailing began.  It didn't end until he plugged his mouth with a well earned lollipop.

In the meantime, I was in serious negotiations with Big E.

I promised him everything if he would painlessly take his lesson with Miss C.  I may have told him he would get a pony.  Sorry, Mr. Yoy.

I let him watch TV on my phone will Little E's terrorizing screams echoed through our 'hood.

When it was Big E's turn, he bravely walked towards the pool.

He made it about ten minutes without crying.  Then he hit his limit.  Miss C sat Big E on the step to show him something and he jumped out and ran.  Again.

Tomorrow will be the true test as they will know why we are going down to the pool.

There better be a pony tied up out front. 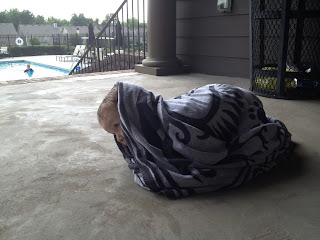