July 17, 2013
On Sunday, I packed up the Yoys and along with my mom, flew down to Florida to visit with my family and friends for a few weeks before school starts back in early August (!!!).

Big E is a seasoned traveler.  We weekend in NYC often and he knows the routine.  I let my mom sit with him.  He would be cake.

I was (self) assigned to Little E.  The last time I put him on a plane was two years ago for Uncle D's wedding.  It was mildly unpleasant.  I resolved to never fly with him again.

I know you are salivating.  You cannot wait for all the dirty, uncomfortable details of the one hour and twenty minute flight to West Palm.

But I'm going to disappoint you.  My kids were phenomenal.**  So much so, that once we landed, I lifted up the backs of their shirts to check for a panel and some buttons.  Maybe they had been replaced by robot Yoys.  For the record, they had not.

I added the asterisks as Little E kept stating with supreme confidence the following phrase.

It was creepy and mostly precipitated by the leveling off the plane once we reached cruising altitude. This is hard to explain to an almost three year old, so instead, I just let him ramble on and on about the plane going down as the neighboring passengers gave me weak, uncomfortable smiles.

I wanted to reassure everyone my kid wasn't some freaky crystal ball baby that could see the future. 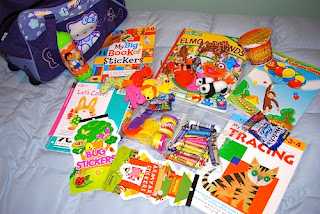 This was not our bag, but it easily could have been.  Fail to prepare and prepare to fail.
airplane Little E mommy blog