July 18, 2013
This afternoon, the Yoys were on the verge of tearing my parents' tidy house apart.  Their energy expanded to every inch of this place and it was only mere minutes before someone was crying.  Or bleeding.

I decided to move them to the kiddie pool up at the club house.

Little E, while kicking butt on toilet training, still refuses to go on a real potty.  He goes on a mini one.  That I've been lugging around everywhere.  This kid has peed in half the parking lots in South Florida.

As we played in the pool, I saw a look of panic flash across Little E's face.  It was poop time.  And I left the mini potty at the house.  I grabbed him out of the pool.  He begged for the mini potty, and I had to break the news to him.

He cried.  He writhed in pain.  I told him he could go on a regular potty and he cried some more.  I told him to go in his swim diaper.  I wrapped him up in a towel and like a Baywatch lifeguard, ran his mummified body to the bathroom.

Maybe this would be his big breakthrough.

I pulled down his swim diaper and he had pooped, but just a little.  This kid has cornered the market on massive man ones, so I knew there was more to come.

Three times we had a code red emergency which included me scooping him out of the kiddie pool, wrapping him up, and running the length of an olympic size swimming pool to get to the restroom where he had a serious case of the shy poops.

I finally surrendered.  We were going to head home.  This was not an enjoyable pool experience for me.  And I didn't want my folks to be branded the people whose grandson pooped in the country club pool.  These old people gossip like middle school chicks.  It is brutal. 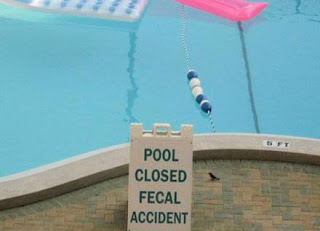 NOT ON MY WATCH!