July 10, 2013
This afternoon as I was packing up the Yoys to go to a play date, I noticed a man in a blue Dodge SUV stopped in the street in front of my house, snapping away pictures of the Yoy Castle on his iPhone.

Because I'm on edge and a little insane, I swung open the front door and went sprinting into our driveway.

CAN I HELP YOU?

I startled the guy.  He smirked at me, gave a half wave and sped off.

WAS HE CASING OUR HOUSE?

AM I GETTING THE NEIGHBORHOOD BEAUTIFICATION AWARD?

WHO WAS THAT GUY?

It made me very uneasy.  We left for our play date, but when I returned home, I decided to call the police.  If our neighborhood was competing in the summer crime olympics, we'd certainly get the Gold for robberies.  It's pretty tense around here. And if Blue Dodge is going to return later and murder me, I at least want the police to know who their suspect is.

APD arrived and the officer was very kind.  He explained that taking pictures is not a crime.  He went through a laundry list of potential suspects that I'd like to share with you.

1) Ex-husband:  I haven't had a chance to send Mr. Yoy running for the hills yet, as we've only been married seven years.  Check back with me in a few.

2) Ex-boyfriend: It's been along time since I had a boyfriend.  If I've still got men taking pictures of my house almost a decade after we dated, well then I am f*cking awesome.  Just saying.

3) Private Investigator:  Now I'm intrigued.  Mr. Yoy works 14 hours a day as an Intellectual Property Attorney and I sit on the couch eating bon bons and blogging.  Who would be investigating us?  We are B-O-R-I-N-G.

He assured me my home was in a good spot for not being robbed.  Comforting. I think.

The officer then complimented my flowers and lawn (which I take great pride in) and commented on the weed sh*t show going on in the adjacent lawn.  Don't get me started, officer, then there really might be a crime.

In the end, he recommended buying a gun and sleeping with it next to my bed, like he does. 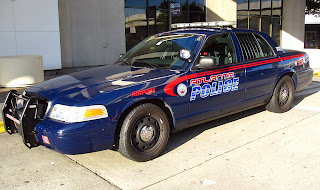 I just need to buy one of these and park it in my driveway.  Then I will sleep soundly at night.
911 crime mommy blog pictures