September 17, 2013
After a stellar checkup at the dentist this afternoon, Big E received a coin to put into the prize vending machine.  There were many crappy prizes to choose from.

Big E ran ahead of me and impulse bought a stick-on mustache.  I thought he made a pretty solid decision given his options.  I was going to stick that thing on his face and take some HILARIOUS pictures.

I WANT THE SUPER BOUNCY BALL INSTEAD.

There are too many indecisive little kids running around this place to have a return policy in place.  The next time you return, you'll get another prize.  That's it.

As I tried to check-out, Big E had a balls-to-the-wall meltdown over his missed opportunity to own a seventh super bouncy ball.  Tears, stomping, pushing as I tried to remain calm, although I wanted to match his crazy with my own that was simmering up inside me.

Not to be outdone, Little E screamed to be picked up.

I signed my life away and hurried out of there with two crying Yoysers in tow.

A few thoughts popped into my head as I dragged my offspring to the van.

1)  Why the hell was I wearing jeans?  It's 80 degrees.  And I know my kids are good for at least one public embarrassment per outing, which immediately raises Earth's temperature by a good 15 degrees.  I wipe the sweat off my brow as I wrestle my kids into their respective car seats.

2)  The size of the tantrum is disproportionally related to the cause.

HELLO BIG E, TODAY YOU WILL NOT GET A SECOND CRAPPY PRIZE AT THE DENTIST. (This is it.  The world is ending. Right here.  Right now.  In Vinings, of all places.)

I WANT TO GO BACK TO THE DENTIST.

I HAVE A CAVITY, MY BABYSITTER TOLD ME SO.

THROW THE MUSTACHE AWAY!

Fine, that I can do.  I assured Big E the prize was going in the trash once we arrived home.

This statement sent Little E off his rocker and he began to cry for the mustache, although I'm sure he had no idea why he was crying.  He just didn't want to be left out of the fun.

I half laughed/half cried the rest of the way home.  I didn't know what else to do. 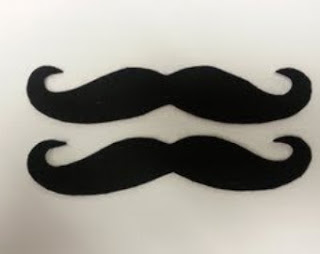