Big E: The Tracks of His Smears

September 24, 2013
At three and almost five, I can leave the Yoys unattended for short timespans without an apocalypse.

This evening I ran upstairs to put their laundry away before bedtime. The cleaning people are coming in the morning, and I have to make sure my house is pristine so they don't judge me and my filth.

It took me five minutes.  That is all.

In five minutes, Big E had used the bathroom.  Yay for him!  Except he left a sh*t trail starting on the side of the toilet seat and down the bowl.

But the damage didn't stop there.

Somehow he managed to smear it down the front of his quads via the arches of his feet.  Apparently, he took up some crazy form of yoga in the brief time I was upstairs.

BIG E!  WHAT IN THE WORLD?  HOW DID THIS HAPPEN?

He looked up at me (because he was busy playing) and smiled.

I WENT TO THE BATHROOM, MAMA!

I asked him to freeze like a statue and went to get the baby wipes.  I wiped up his feet and legs so I could get him to the tub without any permanent poo damage.

As I went to put the baby wipes back, I noticed I, too, was suffering from sh*tty arches.  I had stepped in it, which means it was somewhere on the hardwoods.

I collapsed on the floor and began to clean my feet as well.

Thank the lord my cleaning people are coming tomorrow.  And let them judge me. 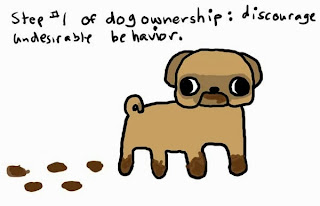 Substitute the dog for Big E.  And me.
mommy blog poop