If I mixed all of these things together in my magic blender, I could pour myself a big, tall glass of the worst afternoon ever.

I pick Big E up from school around 2:20.  We then head straight to the school playground for 1-2.5 hours, depending on how much sugar the Yoys have ingested during the day.

Big E snuck them from my bag and then handed them off to Little E, which is the equivalent of throwing them into outer space.  He is a black hole.

I interrogated Big E, but for a kid that can remember the graphic details of when he fell off a train car in 2011, he had complete amnesia in regards to my keys he had stolen an hour before.

Bless their hearts, Big E's school mates helped me look for hours.  To them it was just another "treasure" hunt.  To me, it was my ride home.

I explained in detail what the keychain looked like.

IT'S ORANGE AND BLUE AND HAS GATORS ON IT.

I realized I was really putting myself out there to these Georgia-bred second graders.

OH, I HATE THE GATORS!

[SIDE NOTE:  I was being heckled by children.  But I get it.  Sometimes, I hate the Gators, too.  Especially Driskell.  With his broken body and all.  I do give props to the parents for brainwashing their children at such an early age, though.  Well done, parents, well done.]

I was defeated.  I called Mr. Yoy.  I could feel his annoyance seething through the phone. He left work early and met us at the playground.  He stayed and searched with the Yoys while I drove home to get my extra set of keys.

We finally made it home close to six.

As of today, the keys are still unaccounted for.

Big E's biggest concern is that someone while find our keys, open our front door, and take his leap pad.

But with each crazy Yoy story, there is a silver lining.  Atlanta's Westside neighborhood is full of awesome people and one of my friends/neighbors has a metal detector that she is going to lend me so I can comb the playground mulch.

Because we all know my keys are buried there and this is just some sick game my kids are playing. 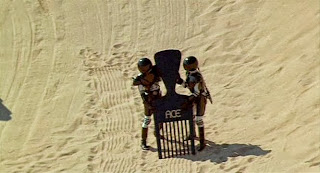 This will be me tomorrow at the playground.  It will be epic.