When we entered the chapel, we were ushered to the front row to put yarmulkes on the boys and get the scoop on what they would be participating in. They were dressed in matching dress shirts, ties, and now, black yarmulkes.

I could feel my deodorant kicking in when I realized they would be up on the bimah (stage) a few times, with many opportunities to do embarrassing things.

The Yoys could not resist the calling of the stage.  As soon as they climbed up there, they could not suppress the urge to dance.  I think they confused the lighting of the shabbat candles with an audition for So You Think You Can Dance.

Everyone around me giggled as my boys pulled out their best dance moves, culminating with Big E's running man during Adon Olam.  I wanted to laugh and cry at the same time.  I desperately wished Mr. Yoy was there to share in my horror/entertainment.

YOUR BOYS HAVE UNLIMITED ENERGY!

I think that was the rabbi's way of telling me I needed to be popping them Lunesta instead of raisins.

But they were not finished.  After I caught them stage diving off the bimah, we headed to dinner.

Thank goodness, dinner was pretty uneventful and also very delicious.  The Yoys ran around with their friends and I finally corralled them into the ladies' lounge to change into their jammies.  It was quickly approaching 10 PM and these kids needed to go to sleep.

Little E thoughtfully surprised me with a giant poop in his undies.  All that apple juice and running was a deadly combo.  Awesome.  I finally got him all cleaned up and moved onto Big E.

Our last attempt at changing into jammies at synagogue ended with Big E streaking down the halls buck naked.  I could see in his mischievous eyes that he had similar plans for tonight.  And because my timing is impeccable, as soon as I had Big E naked, a large group of new congregants walked by the doorway on a tour of the synagogue.  Big E's eyes lit up.  Here was a new audience of folks who had never seen his man parts.  He ran for it.  I full on tackled my kid.  There was no way on earth this kid was getting free this time.  I pinned him down on the floor with my knee and waited for everyone to walk away.  Then I fought him into his jammies.

Big E ran out the door and joined up with the tour.  I guess he, too, wanted a historical perspective of the building he haunts on a regular basis.

More running was followed by dessert and then I finally got my exhausted kids into their carseats. 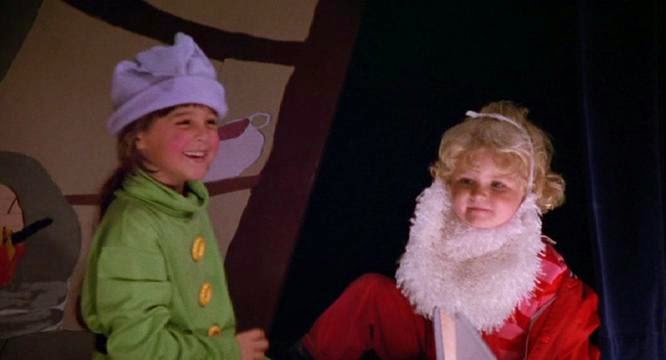 Watching them up on the bimah, was akin to the Parenthood movie scene where Steve Martin is watching his children destroy the school play.
dancing mommy blog synagogue