And there goes my safety net...

February 20, 2012
Since the start of the whole Big E potty training process, I have tucked a pair of pull ups into his underwear at night.

At first I thought I was fooling him.  But he's three now and knows everything, so he quickly caught on to my ruse.

Big E gets up every night to use the bathroom.  This is evidenced by two things:

2) We (mostly Mr. Yoy) hears Big E shuffling into our room in the middle of the night so one of us can pull up his pants and then tuck him back in.  He can work an iPhone, but can't pull up his pants.  AMAZING.

Anyway, tonight we grabbed dinner with our cousin and then dropped him off at his hotel.  It was around 7:30 so the chance that I'd arrive home with two awake Yoys was iffy at best.

Around the time we passed Mr. Yoy's office, the usual barrage of questions coming from the second row began to taper off.  By the time we reached the next stop light I knew I was in trouble.  I began to hear the soft snoring of Big E.  I flipped on the lights just to confirm, and sure enough he was out.  Like dead to the world.

I began an internal argument.

Should I wake him and put on the pull ups or should I just make a seamless transition into his bed?

I was leaning towards just letting him sleep.  His pull ups are dry in the morning, but I just have this fear of entering his room tomorrow morning and being witness to a urine disaster.  Or even worse, the middle of the night.

I called Mr. Yoy.  His vote was to let Big E sleep.

I decided that was the game plan unless he popped right up after we got home.

I unhooked him from his car seat and he gave me one dirty look and then rolled his head back.

Big E was done for the day.

So now it's just a wait and see game.

Everybody send dry thoughts our way.

I'll let you know tomorrow how this experiment turned out. 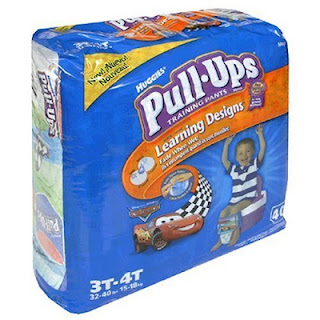