Places I HATE to take my kids

Some people would say small children belong nowhere in public.  I may, or may not, have been one of those people before I birthed the E's.

My latest addition to the list would be at the veterinarian's office.

This morning I had to run Poodle Yoy over to the vet to drop her off for a teeth cleaning.  Big E was at school, but Little E was along for the ride.

I thought I could just do a hit and run.  Sort of like the parents that can drop their misbehaving kids off at fire stations all across Nebraska, even if they are 16, I thought I would just run in and be done with it.

On a side note, I think Nebraska is really onto something, and if I lived there I would definitely incorporate that law into my daily discipline.

YOU DO THAT ONE MORE TIME AND I'M DROPPING YOU OFF FOR GOOD!

Anyway, my plans were thwarted by the receptionist.  She guided us to a room that I guess resembled a pediatrician's office to Little E.

As soon as the door closed, Little E went insane.

He was just at the doctor's last week for his checkup, so this is all fresh on his brain.  He was not game for any more vaccinations and he was going to tell me and everyone in the office this.

After he cried for a few minutes, the receptionist popped back in and told me we could wait out in the main area if the room was upsetting the baby.

ARE YOU SAYING MY CRYING BABY IS DISRUPTING THIS PLACE?  THEN JUST LET ME DROP OFF THE DOG AND GO!

That's what I thought.  But instead I said we'd be fine and I pulled out my secret weapon.  A snack cup.  Little E calmed down and I was able to tend to my other crying baby, Poodle Yoy.  She knew she was in for it.

We ended up waiting over ten minutes, which I was getting mad about, only for a technician to come in and try and up sell me on all this other stuff for Poodle Yoy.

REALLY, SHE'S ALMOST TEN.  IF SHE RUNS AWAY, I'M FINE WITH THAT.  BUT CONSIDERING SHE LIVES UP MY BUTT, I'M NOT TOO WORRIED.

IT'S A TEETH CLEANING, NOT OPEN HEART SURGERY.

I DON'T WANT TO KNOW.

All my smart a** answers were kept to myself, but I was already dropping about $200 on her teeth, I wasn't about to get hosed for $300 more.

We left Poodle Yoy and safely navigated the waiting area without Little E being mauled by the giant Rottweiler waiting for his shots.

This afternoon will be even more epic when I return to pick up Poodle Yoy with both Yoys in tow. 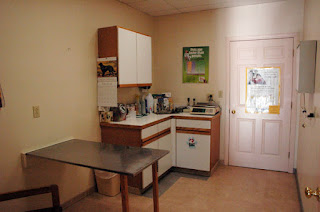 I guess this could be construed as Little E's doctor's office.  All it needs is some nasty old books and that tissue paper on the table.  And hand sanitizer.  Lots and lots of hand sanitizer.