This Used To Be My Playground

February 17, 2012
Today, I met Aunt Yoy at the Chastain playground.  After a day of rain, the Yoys were clawing at the door to get out and play.

This was my first attempt at the playground with two mobile Yoys.

I may have seemed calm and collected on the outside, but my mommy radar was on high alert.

Big E was attempting every apparatus like he was competing for the all-around in gymnastics.

Every time I looked up he was somewhere else.

The only place he wasn't, was close enough to me so that I could help him if he got stuck on something or lost his balance.  He was on his own.

Plus, I have this irrational fear that he'll be kidnapped.  I know he'd probably be returned after about 10 minutes of his nonstop chatter and questioning, but it still makes me anxious.  I repeatedly scanned the crowd for potential creepy people.

Little E was busy exerting his own independence.  His main goal was to go down the slide.  By himself.  Every time I snatched his teetering body from the top of the slide he went insane asylum crazy on me.  His screams echoed off the perfectly manicured golf course.

The only thing that comforted Little E was me picking up that sack of potatoes and holding him as he slide down the slide.

Little E moved on to the rings.  He wanted me to pick him up and let him hang from the rings.  I'm not sure you can appreciate how heavy he is, but my arms were burning.

I was sweating.  I definitely should earn some Weight Watchers activity points for this outing.  What in the HELL was I thinking?

Little E bites the dust.  Repeatedly.  He is a new walker and the mulch is doing a number on him.  He is covered in little splinters.  And he is wet from yesterday's rain. Oy.

My eyes dart around the playground.

Big E.  Not kidnapped yet.

Little E.  Hasn't fallen over the side of the poorly planned cliff at the edge of the playground.

Diaper Bag and wallet.  Haven't been stolen yet, but this is always a real possibility.

After about 40 minutes of pure parenting torture, I surrendered.

Let's eat lunch.  I deserved a big glass of wine and a cookie after that.

As I drove home, I checked that off the list of things I'll never do again. 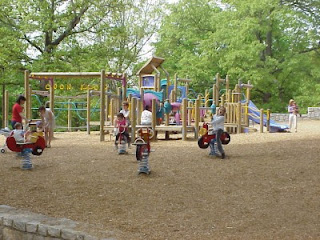 You can see the rings in the background.  I'm pretty sure I couldn't even swing from those things, I'm not sure why Little E thought he could do it.
Big E kidnapped playground