On Saturday, he suggested we go over there and get a work out in.

There was only one problem.  Our children.  Where would we stash them?

His solution: in between the free weights and the ab-machines.

Yes, that's right folks, we took all the Yoys to the gym.

As we pulled up to Mr. Yoy's building,  we prayed for an empty gym.

Mr. Yoy went in first to scope out the situation.  We were in business.

We turned the television to Curious George, handed them snack cups, and jumped onto neighboring treadmills.

The irony is not lost on Mrs. Yoy.

I brought my kids to a gym to get in a work out and I put them in front of a television and gave them goldfish crackers.  Diabetes, anyone?

It went smoothly for the first 24 minutes, thank you timer on my treadmill.

Big E figured out Little E's stroller wasn't locked.  He started pushing the baby around.  I could hear Little E's cries over the LMFAO blasting through my iPod.  I hopped off.

Big E quickly grew bored of torturing his brother and discovered a rack of rubber balls.  His eyes lit up.

Before I could explain that they were weighted medicine balls, Big E had grabbed the red one.

Yeah, no kidding.  Mr. Yoy and I are doing combo squats and chest passes with the yellow one and are this close to performing CPR on each other.

Little E had now ramped up to a steady whine.

Big E was stomping on the goldfish crackers that had missed the boys' mouths and were now littering the floor.

The Yoys had struck again.

We made the executive decision to vacate the gym before any further damage was done to the once pristine gym.

If I had to give the Yoys a grade on their behavior, I'd give them a B-.

I would have preferred a longer workout, but something is better than nothing.  Extra credit goes to Big E for not throwing the medicine ball through one of the gym's many windows. 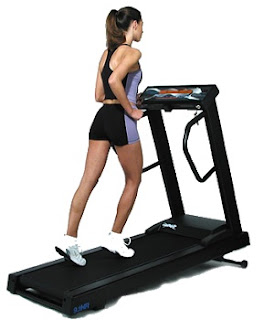 Mrs. Yoy running on the treadmill.  I look good, I know.