March 13, 2012
Big E committed his first crime today.  I always pegged Little E for the future criminal, but I had it all wrong.

I took Big E to the Aquarium to meet up with one of his many lady friends.

Every time we passed by the dining area, the kids called for cake.  Look, I get it.  Cake is freaking amazing, and I, too, would like to eat it for breakfast, lunch, and dinner. And a late night snack.

As lunch time approached we finally broke down and headed into the cafeteria.

I did not have a stroller today as it was just me and Big E.  Little E was enjoying his first day of school.

Like a heat-seeking missile, Big E ran straight up to the dessert table.  You see, at the GA Aquarium they have a giant table full of desserts.  It sort of reminds me of a food challenge on my favorite show, The Biggest Loser. There is every tempting, sugar laden food you could imagine.

So I guess I can't really blame Big E all that much.  He is majorly impulsive.  He is three.

As I yelled out his name, Big E sliced through the crowd of hungry people and grabbed a red velvet cupcake with cream cheese icing.  Good choice, by the way.

I yelled for him to put it back.  He looked me straight in the eyes and pretended not to know me.

And then he did it.  He licked the icing.

If this were a knick knack store, the sign would say: IF YOU BREAK IT, YOU BUY IT.

Today, the more appropriate sign read: IF YOU LICK THE ICING, YOU BUY IT.

I was irritated with Big E.

In general, I don't let him go willy nilly on desserts. Especially, a reasonably priced $6 aquarium cupcake.  The thought crossed my mind to pay for the cupcake and chuck it in the trash as a lesson to him.  But I didn't think he'd particularly understand the lesson, and I'm pretty sure that would have resulted in AQUARIUM ARMAGEDDON.  And I just wasn't feeling up to that challenge today.

Next time, I will be more prepared.  No more cupcake-lifting for Big E. 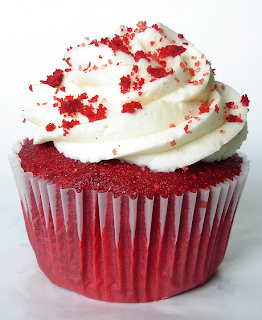 It's gravitational pull was just too strong for my little guy.  And it was eye level.
aquarium cupcake