Houston, we have a problem!

This will be Big E's first trip on an airplane as a toilet trained human.  I'm not even flying with him and I am nervous as hell.

This will definitely be a preview of our flight together to NYC in April, so I'm curious to see how everything goes down.  I'm also thankful it is Mr. Yoy and not me, who has the honor of taking Big E on his diaper-free maiden voyage.

In my dream sequence, Big E would use the restroom ten seconds before it was time to board and he would be fine the duration of the flight.  Of course, he would not be allowed to ingest any fluids starting two days prior to his trip.

What you may call dehydration, I call planning.

But let's not forget the worse case scenario.

This would be a bad case of shy bladder right before Big E boards the plane.  In a panic, about five minutes after take-off, he absolutely has to go to the bathroom and I have to plead with the flight attendant to let us use the bathroom before we have a real plane emergency.

Of course, we will have a super b*tchy flight attendant who will refuse to let my son go to the bathroom and accuse us of being terrorists.  Then Big E will pee all over himself and the seat, which I guarantee won't be the worst thing on it.

Or we make it into the tiniest bathroom on the planet and Big E freaks out.  We end up spending thirty minutes in there while I plead with him to go and he cries and wets his pants.

Like I said, I'm glad it isn't me taking the first flight with him.

And I hope Mr. Yoy skips this entry so he doesn't back out on their togetherness trip. 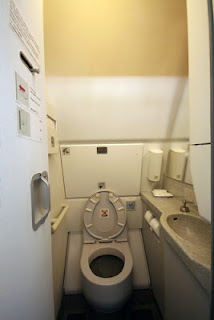