This time, we dragged a visiting Grandma Yoy along.

After we had piled our cart full of things we marginally needed, the Yoys and I waited by the exit for my mom to get her iced coffee fix.

The food line was moving S-L-O-W, but finally, the lady in front of Grandma Yoy received her heaping cup of fro-yo and was headed our way.

I was eyeing her yogurt.  Dang, that looked amazing.  I tried to turn away, but it had me in a trance.

Apparently, I wasn't the only one.  Big E was also eyeing the fro-yo.  Only he took it one step further, as always. As the lady approached our cart, Big E broke into song.

ICE ICE BABY! (then in a creepier whisper version)

The woman laughed at Big E and even gave him a wink, but none of her frozen yogurt.

I'm sure she was wondering why a three year old had Vanilla Ice on the brain.

Before you go judging me AGAIN, in my defense, I would like to state that Sirius Radio 90s on 9 plays the hell out of some Vanilla Ice and you can't deny the hook.

Plus, I grew up in South Florida.  (That, alone, should be an excuse for almost anything.)

Word to your mother! 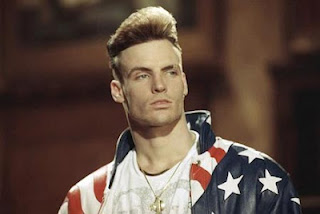