It Began With Warm Weather

March 15, 2012
Today we hit 80 degrees in the ATL.  I consider this sandal weather.  Not just for my tired looking winter feet, but for the Yoys.

They are both mega sweaters.  Keeping them in socks and sneakers is just not an option.  Their little feet become mini furnaces tucked away in their shoes.

Mr. Yoy asked me if I wanted to swing by for dinner.  A light bulb went off in my head.  I could run the kids by the shoe store before we hit up Zoe's for dinner.  They are right next door to each other!  And that way Big E wouldn't have to squeeze his feet into last summer's water shoes, which is what he wore today.

I love it when a plan comes together.

I was getting ready for our 5pm departure, when I checked the store's hours on their website.

Dang.  They close at five.  Who closes at five, anyway? Back up.  Who in the HELL would take their little kids shoe shopping during dinner time.  Two big thumbs pointed back at myself.  I WOULD.

So, we had to reformulate our plan.  Mr. Yoy suggested the Sears at Cumberland Mall.  Then we could just hit up the food court.  HIGH-CLASS YOYS, I know.

Sears was a bust.  Apparently, if you wear an XW shoe, you need to shop at a children's shoe store or online. Thanks to Mr. Yoy for passing down the fat foot gene to our kids.  I wear an 11N, so clearly their brick feet do not come from me.

Mr. Yoy then suggested we look for a dress for our upcoming staycation at The Mansion on Peachtree.

Seriously?  With the kids in tow?  I poo-poo'd the idea immediately, but was sucked into Francesca's by their pretty spring dresses.

The Yoys had eaten, but it was coming up on 8 o'clock and the warning sirens were faintly sounding.

Mr. Yoy then name dropped White House|Black Market, which I freaking love.  How could I resist?

As Big E ran through the racks of expensive clothes, I hurriedly grabbed two sizes of a dress I liked.  I grabbed Big E and took him in the dressing room (big mistake). Surprisingly, there were numerous women in there to be audible witnesses to what happened next.

As I pulled my jeans and t-shirt off, Big E began the much dreaded narration.

I heard the lady in the stall next to me stifle a giggle.

It was funny, I know.  But I was most certainly not naked. I had on undergarments.  I quickly corrected Big E.  I gave him the job of holding all my stuff, but he was too easily distracted.

I grabbed the smaller sized dress first.  Always the optimist, I know.  I wiggled, and I'm using that term loosely, into the first dress.  I was so preoccupied with Big E, that I didn't take the time to realize that this dress was not intended for my body.

When it came time to take the dress off, I couldn't.  It was stuck.  Holy sh*t!  I'm in this dressing room with my kid who won't stop talking and I can't get this dress off.

I casually call for Mr. Yoy and ask him to wheel Little E into the dressing room.  Now we are all in there.  This is turning into quite the party.

THANKS, JERK, HELP ME!

I have visions of the stylish sales lady cutting the dress off of me and then ringing it up for the $129.  She then hands me a receipt and a request to never step foot in the store again.

But thankfully, after much maneuvering, Mr. Yoy helped me get this dress over my shoulders.  I'm too scared to even try on the bigger size.  And, I've pulled some muscle near my collarbone, to boot.

Mr. Yoy did bring in another dress that he liked, and it looked much more user-friendly.  So I tried it on.

Thanks, Tim Gunn.  How did you get in my dressing room?

We agree on the dress and get the heck out of there. But not before Big E notices the giant mirror.  He steps in front of two ladies trying on clothes.

THIS IS THE BIGGEST MIRROR EVER! 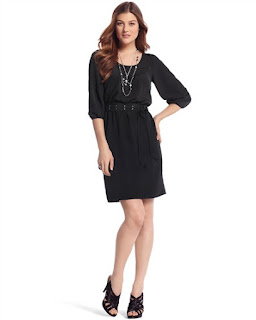