Big E: In Need Of An Anatomy Lesson

We were scheduled for an on-time departure.  And by departure, I mean when the Yoys departed me and went into their respective beds.

As I pulled the Yoys out of the tub, I glanced at my watch. 7:10!  I will have all night to read some magazines, catch up on Teen Mom, and not blog since my kids were pretty decent human beings today.

Big E must have sensed my upbeat mood.  He must have known my readers were clamoring for an entry.

I had just taken both Yoys out of the tub.  I was diapering and dressing Little E.  Big E had climbed up on his bathroom step stool and was clamoring to brush his teeth.  He yelled for my help.

I ran into their bathroom and told Big E to wait five minutes, I was putting Little E down and then we could go gang busters on the teeth brushing.

I finished up with Little E, read him a few books, and tossed him in the crib.

One down and one to go.

My thought was stopped dead in its tracks.

There, standing proudly at the sink, was Big E.

I BRUSHED MY TEETH, MOMMY!

Umm, more like he painted the sink, countertop, cabinets, his own body, and my personal favorite, his hair, with sticky, blue, Toy Story toothpaste.

It was like he set off a toothpaste bomb in the three minutes since I last laid eyes on him.

Here I go again repeating questions I didn't really want to hear the answers to.

I busted out the baby wipes, but after a few half-hearted tries, I surrendered.

BIG E, GO TO OUR BATHROOM.  YOU ARE GETTING A SHOWER.  AND IF YOU TOUCH ANYTHING ALONG THE WAY, YOU BETTER JUST PACK YOUR BAGS!

As the shower water washed away the remnants of toothpastegate, I allowed myself to chuckle.  And then I told Big E to not make two bedtime washings a habit. The City of Atlanta water bills are crazy ridiculous, and I'm not sure we could afford it.

The Yoys are asleep now.

I spent some time washing down their bathroom.  As usual, our cleaning people were here this afternoon, so things stayed clean for approximately 5 hours.

A little later than I planned, but I will now go read magazines and catch up on Teen Mom.  And I even blogged! 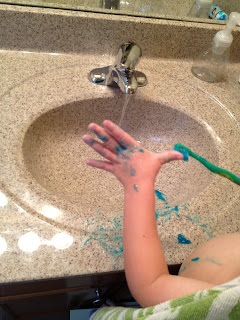 Just an FYI, teeth are in your mouth.  They are not fingers.
Big E messy teeth brushing