July 27, 2012
Last night was a late night for the Yoys.  We hit up the Atlanta Food Truck Park for some mac n cheese deliciousness, cupcakes, and playground time.

We arrived home around nine.  The boys were pretty wound up.  Like a rancher, I tried to herd the cattle, I mean my kids, inside to begin bath time.

Little E was cooperative as usual, but Big E had other plans.

First he went and hid dangerously close to the rose bushes.  He'd rather get attacked by thorns than take a bath.

As I strode over there to pick him up, he leaped up, and ran for it.

Down the hill he went.

He veered off the sidewalk and was headed up the next street.

I was shocked.  Is he for realsy running away from me?

Do I run after him and leave Little E sitting in our driveway?

Ugh, it was too hot and too late and this was all too ridiculous for me.  This is why people started leashing their kids!

I quickly scanned my resources.  I was desperate.  I did something really mean.

A few months back, I took Big E to a dog park when we were visiting my family in NYC.  Ever since then, Big E has been deathly afraid of larger dogs.

So, I pulled the dog card.

I dug deep for some realistic acting skills and yelled out for my whole neighborhood to hear:

BIG E, LOOK AT THAT GIANT DOG RUNNING TOWARDS YOU!

He stopped dead in his tracks.  Turned around and SPRINTED towards me.

I picked him up and looked at the panic on his face.

I felt horrible.  Honestly, I did.

But it was either this or risk him being hit by a car.  I chose mental terror instead of death.

Big E kept looking for the dog.  I told Big E the dog must have gone inside to take a bath. 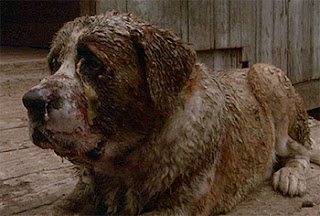