As I walked out of their playroom, I noticed the couch was covered in what appeared to be water.  I leaned over and smelled it to be sure.

Unfortunately, it was Poodle Yoy's urine.  In puddles on my beautiful leather couch.  Sweet.  Just what I wanted to do at this exact moment in time: a leather intervention.  I got to work cleaning up the mess.

Little E was walking around with a plastic fireman's hat on.  This hat has been in our possession for close to a year.  Neither one of my children has shown any interest in it.  Until tonight.

Big E shadowed Little E and repeatedly knocked it off his head.  Little E would cry until I put it back on him.  Then Big E would knock it off again.  Wow, this game sucks. Bad.

I asked Big E to leave Little E alone.  He ramped up the stakes and moved the hat to the middle of our kitchen table where Little E had no shot in hell of reaching it.

I then told Big E to report to time out on the bottom step. He politely refused and ran and hid partially under the dining room table.

In between soaking up the dog urine and applying the leather cleaner, I made a trip to the dining room.

I DO NOT LIKE THIS BEHAVIOR.  IT IS UGLY AND IT NEEDS TO STOP.

That is Big E's patented go-to time-out move.  It is such bull, and at this point I'm over him.

THEN PEE IN YOUR PANTS, BUT YOU ARE STAYING IN TIME-OUT, EVEN IF YOU ARE UNDER THE TABLE.

It was quiet for a few minutes.  I finished cleaning up the couch.  Little E continued on with his fireman hat.

He walked into the kitchen with his pajamas soaked in that all too familiar pattern around his crotch.

I think I yelled that like 12 times in a row.

I'm not going to lie, frustration tears welled up in my eyes, too.

Ok, so maybe it is like 2% my fault because I TOLD him to do it.  I didn't think he would actually do it.

I knelt down on my beautiful dining room rug.  I felt around in the area I last saw him and sure enough it was soaked with urine.

I had this down to a science since it had been approximately three minutes since I last cleaned up urine.

I shook my head back and forth as I cleaned up the rug. Big E was draped over my back, crying hysterically.

We finally made our way upstairs.  I excused myself from the boys for a few minutes and locked myself in the bedroom.  I was on the express train to Losingitville.

I called Mr. Yoy to vent.  I could hear him stifle a laugh over the phone.  At that moment, I wished I could reach through our connection and snap his neck.  I was so upset.

Both Yoys are sleeping now.  Big E asked me if I would still be mad at him in the morning.  It made me feel bad.  I just have to remember that I'm dealing with a three year old, not an adult, even if he sometimes talks like one. 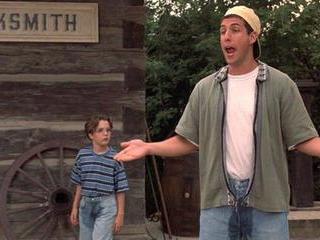 This is basically how it went down.  And, yes, this is my SECOND Billy Madison reference this week.