A Murder in our 'Hood

July 07, 2012
Earlier, we went to a birthday party in our neighborhood.

Birthday parties, in general, are a source of severe stress for me.

I always feel like my kids behave like wild animals.  Way worse than they ever would at home.  I don't know if it is because they have an audience or they are being pumped full of juice boxes and cake, but most parties end with me sweating and embarrassed.

Today was no different.  The kids were all partaking in cupcakes on the back patio.

My eyes scanned over to the table next to them.  Location of the Yoys.

It's like fangs had grown out of their mouths, and they were murdering these cupcakes.  I'm pretty sure they were making sound effects.

Little E was the absolute worst.

He managed to grow a full cupcake beard, not just a five o'clock shadow.  He took his fat little icing covered hands and rubbed them into his hair like he was shampooing in the shower.  Then he rubbed them over his belly.  It's like he was saying this tastes so good in my belly, but in sign language.

The other parents laughed.

I wanted to yell out:

WHAT IN THE WORLD IS WRONG WITH MY KIDS??!!!

Of course, I didn't.  A look of embarrassment and shock settled over my face.  I tried to rationalize things to make myself feel better.

Sure, those little girls are behaving so politely now, but just wait until they are teenage girls.  Then, I felt a little better, sort of.

One dad offered to spray Little E off in the backyard.  I seriously entertained the offer, but in the end we decided just to evacuate to our house and throw them both in the tub.

I wouldn't even let them back in my neighbor's house.  I made them walk around the side.  My kids literally did the walk of shame out of a party.  Oy. 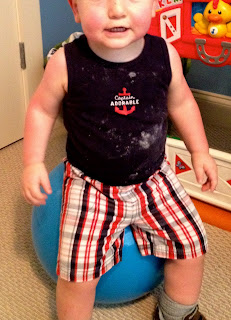 I really should just send Little E to parties naked.  Clothing is too much of a hassle.