The Snack Cup: A Follow Up To The Carrot Test

At the time, I was oblivious to his weight issue.  Well, sort of.

Sure, people made crazy comments every time I ventured out in public.

WHAT ARE YOU FEEDING THAT BABY?

HE SURE DOESN'T MISS A MEAL!

But I just saw my sweet little boy, when I looked at him.

He began walking in January (FINALLY) and pretty much stopped eating around the same time.  I even heard that some of the other kids were gossiping about his babyrexia.

Personally, I believe Little E heard and understood every back handed comment that had been casually thrown his way and had finally had enough of it.

For lunch today, I made him mini tortellinis, carrots, and a tangerine.

He excitedly ran to his little table, sat down, and proceeded to house the tangerine.

And then he was done.  He ran off before I could even wipe the citrus juice off of him.

Frustration pulsed through my veins.  Why won't this kid eat his meals?  He has got to be hungry.

I didn't have too much time to worry about it, as we had to leave to pick Big E up from camp.  I looked at his plate full of food and had another great, mind game idea.

Remember the carrot test?  When I don't think Big E is hungry, as he is always begging for food, I offer him carrots.  If he eats them, I know he is for real.  Who wants to eat carrots, anyway?

This time I popped open a snack cup.  These are usually reserved for bribery goodness such as goldfish, puffs, and raisins.  Interestingly, all things that Little E has no problem eating.

I dumped the contents of his plate into the snack cup, and threw it in my diaper bag.

Once I had Little E loaded in the bus, I pulled out the snack cup.

His eyes lit up.  The straps of his car seat cut into him as he tried to lunge forward at the prize.

I happily handed Little E his lunch, camouflaged as a snack cup.

And you know what?

That little turd ate the whole dang thing on the way to camp.  The same exact food he had refused to eat minutes earlier.

I was one happy Mrs. Yoy.

DISCLAIMER:
I, in no way, ever thought Little E had a weight issue. Neither did his doctor.  It was just every one else in the world. 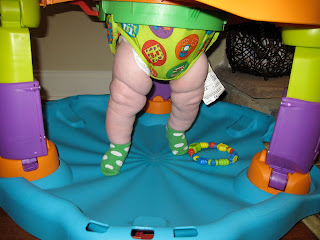