And I didn't think last night's 10PM Panda Express dinner could be bested!

We promised Big E that tonight, we would take him to Jim-n-Nicks for dinner.  He is obsessed with the cheese biscuits.  During a previous parenting lapse, we allowed him to eat unlimited biscuits.  He housed seven or eight before he gave up.  I was pretty impressed as he is a little squirt.

We arrived at the restaurant and were seated almost immediately.  Mr. Yoy and I scanned the menu and planned what we were going to order the boys.  We have streamlined the dining out experience, as we know we are in possession of two ticking time bombs.

Five minutes passed and we had not been greeted by our server.

I pop the top to a fresh canister of Puffs.  Big E grabs for them, not realizing the top is off.  He made it rain Puffs in the middle of JNN.  Normally, I would have been mortified, but I was hoping his spectacle would grab the attention of a server.

Ten minutes and nothing.  No one has approached us.  I tried to flag down the host to see if he knew who our server was, but he declined to make eye contact with me.

Now we are done with Puffs.  We are pretty much dead.

The table next to us was occupied by another family with young kids.  The little boy, around Big E's age, was suffering with some sort of whooping cough.  Special thanks to his mom, who not only allowed him to approach Little E, but didn't stop him when he began running his germy, nasty hands all over Little E's arms.

I wanted to reach out and break his hand.  I refrained. But I did give his mom death stares.

Fifteen minutes and this is becoming a joke.

I WANT BISCUITS!  I WANT MAC N CHEESE! (I promise I feed them stuff other than utter crap)

We go running out and decide we aren't coming back to JNN anytime soon.  We usually have sh*tty service there, but this is the first time that we've actually had no service.

We left with nothing but some sort of disease that will present in Little E within 24-48 hours.

We debate going home.  It is now 6:35 and getting dangerously close to bedtime.  We are out of snacks.  We are playing Russian Roulette.

Mr. Yoy sells Ted's Montana Grill.  I jump on board because I can eat the sh*t out of some pickles.  We debate between the Cumberland Mall location (also notorious slow service) or the E/W connector.

We decide to go out the E/W connector.  It is further than we remember, we arrive around 6:50.  Where are all the cars?

IT IS OUT OF BUSINESS.  TRUE STORY.

So after pumping Big E up to eat there, we have to explain the sour economy and how restaurants are always the first to go.  He quickly loses interest in our sad, but cautionary, tale.

Across the parking lot is an IHOP.  It's not even our 18th choice, but we are desperate.

Big E does NOT want to eat there.  We give him a fair choice.  This or nothing.  He chooses IHOP.

Mr. Yoy and I eat a totally unsatisfying dinner.  The boys coat themselves in Mac N Cheese, pancakes, and fruit. Mr. Yoy actually moves over one table because he can't stomach eating so near to the animals.

So our lovely Sunday night family dinner was a complete bust.  We jump in the bus and drive home in defeat.

Just when I thought the night was a total loss, Big E's song came on the radio.

Big E was belting it out.  Mr. Yoy looked bewildered.  I couldn't control the urge to fist pump.  We were rocking out.  People in the neighboring cars looked on with jealously.  They wanted to be in our big, fun bus.

And when I thought it couldn't get any better, Mr. Yoy busted out with the Harvard Baseball Team's Call Me, Maybe dance.  Seriously, check this out.

I almost drove off the road.

My night had been recovered.  It was amazing. 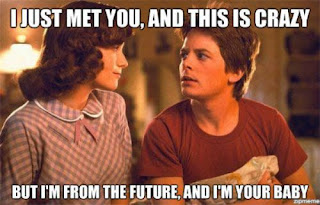 This really doesn't have to do with anything, I just found it hilarious.  And if you don't know the song I'm referring to, you live under a rock.  That is all.