August 25, 2014
During a recent weight watchers meeting, a lady described how she used spaghetti squash to replace spaghetti in her recipes.  If this was for real, this would be a jackpot for the Yoys.

Big E would be content manhandling his way through a giant bowl of buttery spaghetti for every meal until eternity.

The problem is, it has zero nutritional value.  But if I can get him to eat a steaming bowl of squash disguised as spaghetti, that would be the greatest mind game I've ever played on him.

So I bought the spaghetti squash about ten days ago.  I put it in my fruit bowl and let it intimidate me for about a week.  I'm no Bobby Flay and the thought of cooking something new was daunting.

But not for Mr. Yoy, who threw that thing in the oven last night and we had "pasta" with our chicken and brussel sprouts.

I reheated the remainder of the squash for dinner tonight.  I threw on a little butter and parmesan and presented it to the Yoys.

UH, WHAT IS THAT?

Big E busted me .5 seconds in.  He can sniff out something nutritious from a mile away.

WHY DOES IT LOOK DIFFERENT?

I wasn't going to lose my cool, yet.

OH, IT'S JUST A DIFFERENT BRAND OF SPAGHETTI, BUT IT TASTES THE SAME. EAT UP.

I probably don't even have to tell you how this ends, because you already know.  It ends the same way my from scratch organic chicken tenders went.  And my organic, slow-cooked macaroni and cheese went.

There was an obscene amount of gagging and fake throwing up.

He must be warming up for tonight's Emmy awards. 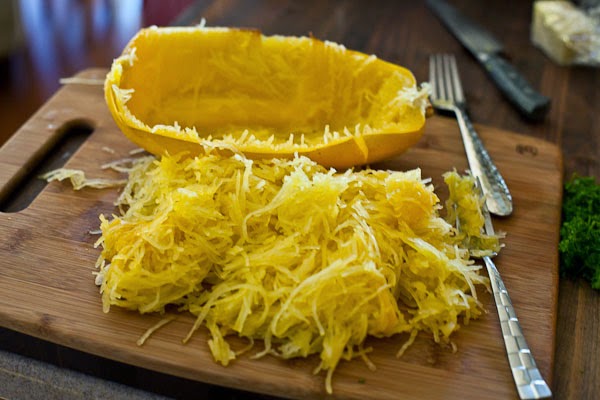