August 15, 2014
It's Friday night and since Mr. Yoy is STILL slaving away at the firm, I figured I'd do a little blogging.

After school today, I took the Yoys to the YMCA for an end of summer pool party. We wasted the afternoon away at the pool.  And part of the evening.  I finally got the boys in the Y shower around 7. I had them jammied and was prepared for them to "accidentally" fall asleep on the short drive home.

I got everyone situated in their car seats and put on some mood music.  Hello, classical! Now if only the sun would dive behind some clouds for the next fifteen minutes.

As usual, my expectations were too grand.  The Yoys chatted away as we made the trek towards home.  There would be no sleeping.

We arrived home, went upstairs to finish up bedtime and start reading.

I thought I was golden when Big E pulled another Dinosaur book out.

WHY YES, I WOULD LOVE TO READ TO YOU (AGAIN) ABOUT HOW FOSSILS FORM IN MUD!

I was nodding off during the book.  Big E was pretty glazed over.  Little E was sucking away on his thumb.  This was going to be C-A-K-E.

Then I heard the footsteps.  I played dead, which wasn't all that difficult.  Big E saddled up next to the bed.

I wanted to call bullsh*t on this statement.  I was weighing the idea of giving myself pink eye rather than getting up to take my contacts out.  My son, who spent all day in school, followed by all afternoon swimming cannot fall asleep a mere 14 hours after he awoke.

In May, I began giving Big E melatonin (or as we call it, Fluoride treatment, because there is no way he'd voluntary take something that might make him tired) on a nightly basis.  The agonizing bedtimes which stretched on for hours ended immediately.  He went right to bed every night around 7:30.  It was glorious.  But his doctor said I could try it for a month and then see if his normal sleep rhythms had returned.

I have been sporadically giving him the melatonin since.  I figured tonight would not be a night that he would need some sleep assistance.  I was wrong.

And he was amped.  And also delirious.  As I showered with no privacy, Big E worked on his chore manifesto.  He and his little brother (who was sleeping and still somehow roped into this) would do a different chore every day.  Laundry, dishwasher, cleaning the playroom, starting the car...?

I just nodded yes and agreed to write all of this down so he would remember.

After three tuck-ins, I finally got Big E to bed a little after 9.

I know I'm rambling a bit, but I just can't comprehend how Big E isn't ready to pass out every night. 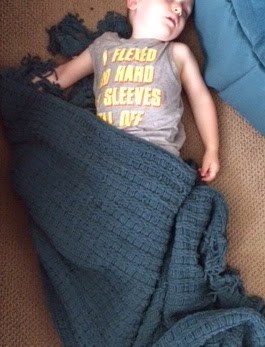 This is more of what I was expecting.