August 03, 2014
This past month I completed my first solo airplane ride with the Yoys.

The boys are usually pretty well behaved on the plane.  I bring their Leap Pads, learning books, cards, snacks that I would never feed them at sea level and all sorts of small surprises.  The 75 minute flight to Florida would be cake.  And it was.

I strategically planned the luggage situation so that I would be able to get all the luggage and the boys and their surprise-laden backpacks to the park-n-ride shuttle.

I brought a giant suitcase and a smaller bag that would hook onto the suitcase. I'd drag that, my purse, and the backpacks all while holding a sticky hand to the shuttle.  It would be slightly difficult, but I'm supermom and I had this.

After deplaning, we had to stop not once, but twice for Little E to use the bathroom.  And that was without a train ride as we arrived at Terminal T. (This was a major problem.  Both boys held back tears as I told them we wouldn't be riding on the plane train.  If we didn't have luggage waiting to be stolen at carousal four, I would have taken them out a few gates and back.)

When we finally arrived at baggage claim, our two sad bags were the last ones left.  The belt was off. There was no one around.  It was unusually quiet.

I grabbed the giant suitcase first.  When I pressed the button to release the handle, I discovered that the airlines had bent my bag and it had disabled the handle.  I will not name the offending airline, but let's just say it rhymes with Schmelta.

I took a deep breath.  I looked around for the guy with the flat cart that helps people who overpack for trips.  He was no where.

I would now have to drag the luggage while shouldering backpacks, my purse, and an unplanned piece of luggage as I could not hook it up to the handle because it was jacked.  And let's not forget Little E's hand.

We began our journey to the shuttle bus terminal.  It was ugly.  I was sweating in my jeans.  Big E was holding onto my purse to add some additional weight.  I kept waiting for someone to hook a big belt with an attached 18 wheeler to my waist, because why not?

We had to make it through three crosswalks without anyone getting squashed. It was like a game of Frogger on acid.

I almost cried when I saw our shuttle bus.  The driver must have sensed my struggle and bounded down the steps to help me.  It was over. 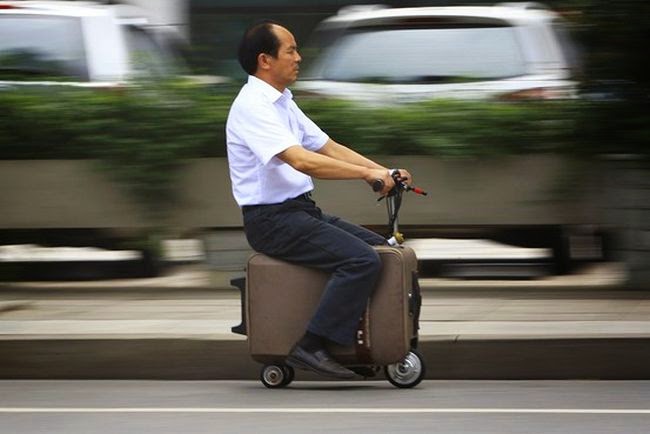 This would have come in handy!