He and a few of his classmates thought it would be HI-LARIOUS if they pulled down their shorts and undies in the cafeteria during lunchtime.  It was not. Because no one wants to see your hot dog while they are actually eating a hot dog.

Big E's teacher sent a note home in his backpack detailing the incident.  He knew he had messed up.  Upon arriving home from school, Big E ran into his playroom and shut the door so he could "be alone with his toys and his backpack".  Maybe he thought he could destroy the evidence, but I'm too sharp for this kid.  Because I've been a kid.  Although, I was perfect and never got into any trouble.

I sat down and asked Big E why he had done this and explained why it was inappropriate.  While everyone was laughing at it today, he could find himself in real trouble if he continued showing his privates in public.  He seemed to grasp why I was so upset and disappointed in him.  Shower, yes.  Bedroom, yes.  Salad bar, no.

Once I had gathered the full story,  I called Mr. Yoy to discuss punishment.  Big E could either miss Bingo Night that evening (which he has been waiting for for precisely 364 days) or he could go a week without any screen time.  No TV.  No computer. No Leap Pad. No iPhone.  Just a boy and his old school toys.

Big E chose to give up his screen time.  Amazingly.  Although after he didn't win at Bingo he tried to negotiate his way out of the contract he wrote up and signed.

I WILL NOT PULL MY PANTS DOWN IN PUBLIC. 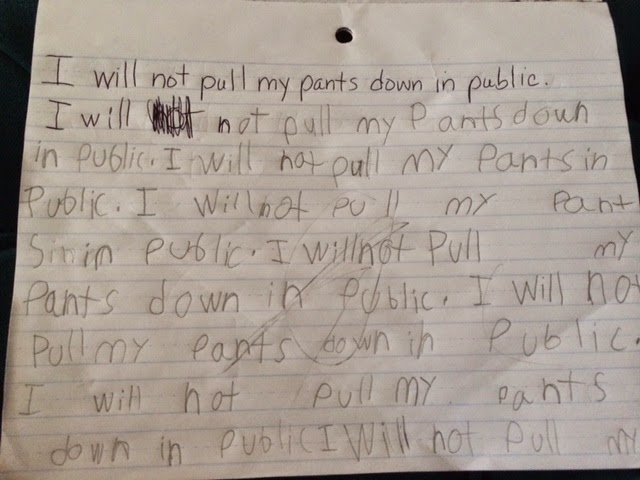 Big E cried his way through his writing punishment.  He yelled at me for being mean.  But I was just as upset.  I had the kid that didn't know when it was appropriate to show his privates.  He will be six in about seven weeks and he is old enough to know.

We are on day five of no screen time.  The first day was rough.  He cried for it. He "NEEDED" it.  But it was not oxygen.  It was not water.  It was not food.

I directed him towards his playroom full of toys and he began to play and keep himself entertained.  The old fashioned way.  Today we took Sorry outside and played a few cut throat games on the front patio.  Big E made no mention of the television.

With the exception of the Lego eating incident, I have been surprisingly pleased at how quickly my kids adapted to the no screen time rule this week.

It makes me seriously consider doing this on a more frequent basis.