November 10, 2014
Friday we flew up to New Jersey to visit my brother and his family.

We navigated the Newark airport with ease.  It was pretty empty in the middle of the afternoon.  As we walked the long, carpeted halls I saw in the distance a person approaching us.  Just one person.

As she came closer, I quickly realized she was a Little Person.

My kids have never seen a Little Person before.  I panicked because I knew there would be stares and comments.  Not in a hurtful way, but in a very curious way.

It was just us and her on a collision course.  There were no other people, no back ground music, nothing except the occasional airplane to drown out the questions I knew would come.

How was I going to escape this situation unscathed?  I quickly came up with a game plan.  I was going to start asking Big E random questions to keep him engaged.  I wasn't super concerned about Little E as half the time he is living on another planet.

WHAT GAMES DO YOU WANT TO TEACH COUSIN N?

ARE YOU GOING TO TAKE THE DOG OUTSIDE TO PLAY FETCH WITH HIM?

DO YOU WANT TO WALK TO THE TRAIN STATION AND WATCH THE TRAINS?

Big E half-heartedly answered my rapid fire questions because he had already locked and loaded his eyes on the woman.  Something looked different and even as a mere 5 year old, he knew it.  And it was written all over his mouth gaping, 5 year old face.

I tugged on Big E's arm to speed him up as we passed her.  He pulled his arm free and slowly spun himself around so that he didn't lose sight of her.

When she was out of ear shot I breathed a big, fat sigh of relief.  Big E finally turned back around and joined us on our walk to baggage claim.  He looked at me like he had eaten the canary.  I know he wanted to ask me about the Little Person and I know I should have addressed it.  I just didn't have the energy to answer the millions of questions that would have followed. 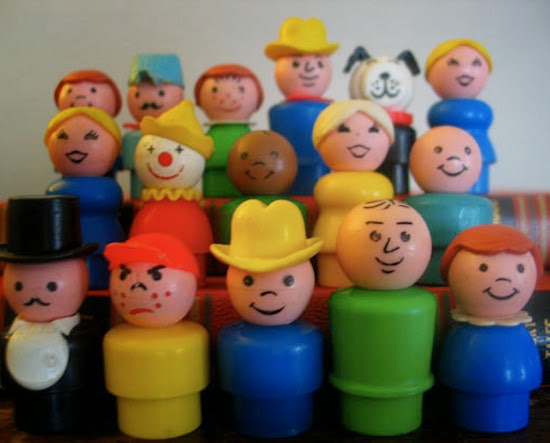 My mothering skills were put to test.  If it only Newark was scattered with these guys instead.