November 20, 2014
This morning I received a call from Little E's teacher.  He was complaining of a belly ache.  I told her I'd be over to school ASAP to grab him.  I quickly tucked my long nightgown into my yoga pants, creating a giant donut effect around my mid-section.  Luckily, I was still wearing my coat from the morning bus stop run as my house was a balmy 66.  With my coat on, no one was wiser to my clothing hijinks underneath.  Off to school I went.

Little E seemed fine when I arrived and his teacher told me he had cried when she told him I was coming to retrieve him.  He claimed to feel much better, but I signed him out anyway.  I had been saving all of my errands for today.  Little E's illness could potentially destroy my productivity.

I asked him if he felt well enough to run to Toys R Us to grab Big E's birthday present and Costco to get drinks for the Thanksgiving party tomorrow at school.

He gave me the thumbs up, so we were on our way.

We were on 285 one exit shy of Costco when I heard the gurgling noises from behind me.  I turned around to see Little E vomiting all over himself, the car, the stack of learning books next to him, and every little crack and crevice you can find in the back seat of the car.  And it was brown.  Just like the chocolate milk I ask him not to drink each morning at school breakfast.

Little E turned four in July and up until today, he has never vomited.  It was a pretty good streak he had going.  I thought he was immune to the nasties that were always floating around class.  I thought wrong.

I drove to the next exit and immediately looped back around to head home.

MOMMY, GET IT OFF ME!

I had no towels, no change of clothes, no wipes.  Nothing.

I was utterly unprepared.  I had gambled and lost.  Big time.  I felt terrible for dragging him around town with a bad tummy.  I was the worst mom ever.

We rushed home.  I stripped him, put him in the hot bath, and scrubbed him clean.  He played in the tub for an hour.  I thought his skin would fall off.

He's currently resting on the couch.

I'm currently bleaching the back seat of my car. 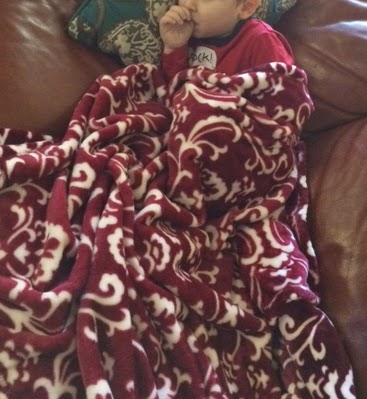 A red shirt AND a red blanket?  He'll be just fine.