Off with his thumb!

He kicked the pacifier habit long ago.

But he has developed an even harder habit to break.  He is a thumb sucker.  Big time.  His calloused thumb serves as a constant reminder of my parenting fail.

HOW DID I LET THIS GO SO LONG?

At his dentist appointment yesterday, I learned that he has developed a 30% overbite from his relentless sucking and his teeth were flaring out on the side he favors. Awesome.

Big E's dentist and I both feel like we need to break the habit now, as I'm sure he will already need years and years of orthodontic work based on his genes.  Why complicate things even more?

During the day, I constantly remind him to pull his thumb out.

He shyly smiles and does, but I know he can't help out.  He probably doesn't even know he is doing it.

Tonight I tucked him in, and explained that if he went a whole week without sucking his thumb, I'd take him to the toy store and he could pick out a special treat.

He seemed really happy about the prospect, then immediately put his thumb in his mouth.

I motioned to his thumb.  He pulled it out.

Smart kid.  But, I still made him take it out.

I peeked in on him about thirty minutes after I put him down.  His thumb was snuggly tucked into his mouth.

Aside from going all French Revolution on him, can you think of a less emotionally scarring way to break Big E of his thumb habit? 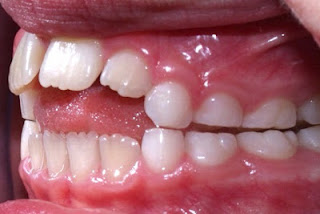 Big E's future teeth if he doesn't cut it out.  Also, pictures of teeth scare me, but I'm not sure why.