We have ourselves a game, folks!

Big E was dirty enough when I picked him up from school. Mysterious stains clung to his once navy t-shirt.  But as dirt overachievers we were not done.  I then took him to an hour long class at a local art school where he glued, painted, and glittered.  After that he was really dirty. Like, he could easily be inducted into the dirty hall of fame (on the first try).

In general, I like to put the Yoys to bed squeaky clean, but mid-day baths do have one redeeming quality.

They are done mid-day.  Before all of my energy and patience has been consumed.  Then, when bedtime comes, it is one less thing on my list.  Although, I do have to spend the majority of the afternoon keeping them indoors and away from food, paint, and anything else that could potentially require a SECOND bath of the day.  THE HORROR!

Getting back to my point, we were in the bath.

Things were moving along right on schedule.  I had finished cleaning them up and it was now playtime. Playtime consists of Little E playing with toys and Big E grabbing each and every single toy away from Little E. Then Little E cries out for me to intervene and make things right in the tub world.

It is really pitiful.

But today something new happened.

Big E took away the Thomas bath toys Little E had been clutching in his sausage fingers.

Little E began crying.  He was mad.  I watched as his eyes searched the tub for a revenge vehicle.  It came in the form of a giant boat floating past.

Little E picked up that boat and threw it at Big E.

For a split second, I was so, so happy for Little E.  After 21 months of constant torture and bullying at the hands of his big brother, he FINALLY fought back.  Little E had had enough of Big E's sh*t!  I have been waiting for this moment.

Crying.  This time from Big E.  I'm not sure if he was truly hurt, but at the very least his ego was.  It's not that I want to see either of my children injured, I'm just saying Big E may have had that coming.

My hope is that Little E continues to stand up for himself and that Big E learns to be kinder to his brother.

I am aware of how unrealistic this is, but I'm just stating this as my hope.

The reality is they will probably wrestle and break all of my furniture, etc. until they leave for college in about 15 years. 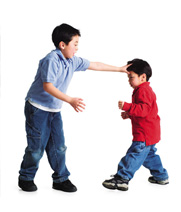