November 07, 2012
My brother is visiting from NYC.  On Monday after we picked Big E up from school, we headed over to Toys R Us so Big E could select his birthday present.

Mr. Yoy and I decided to buy Big E the Leap Frog tablet, so I could regain custody of my iPhone.

I figured Big E could pick out a game and we'd call our shopping trip a day.

Our trip to the check out line was derailed by a giant Little E poo and a Thomas the Train table.  We finally made it to the front of the store.  I checked my watch.  We had been shopping for almost 30 minutes.

I handed the Leap Frog slip of paper to the cashier.  Apparently, people steal these things, so you have to have someone dig one out of the warehouse when you are committed to buy.

The cashier radioed back to someone for the tablet.

The Yoys were done, even if we were at a toy store.  They began grabbing candy from the so thoughtfully placed shelves in the check out aisle.

UM, DIDN'T WE JUST GIVE ALL YOUR CANDY TO YOUR DENTIST?

Then they moved on to the little toys, hand sanitizers, and other impulse buys Toys R Us wants you to make.

Little E was screeching for no reason.

I checked my watch again.

Fifteen minutes had passed and no one had appeared with the tablet.

I APOLOGIZE I CAN'T GET ANYONE TO HELP.

The cashier was not unaware of the Yoy hurricane currently sweeping register three.

MAN, CAN YOU HELP US OUT?

My brother finally stepped in.  He is not used to the ongoing chaos my children bring to any situation and he's had enough.

The cashier asks us to bring everything back for him to ring up in electronics.

When we make it back there, we see the Toys R Us electronics guy.  He's the one that's been ignoring our radio calls for a quarter of an hour.  I shoot him a death stare.

He is chatting with some guy WAY too old to be hanging out at a toy store salivating over video games.

The cashier makes a comment to his co-worker about not helping and heads back to find the stupid tablet.

FINALLY, he brings out the tablet.  We've been trying to check out for 30 minutes.  I know it doesn't seem like a long time, but think about the boys.  They are losing their minds at this point.  We probably should have bailed.

But my favorite part of the story is about to unfold.

As the cashier is ringing us up and putting an end to everyone's misery, nerdy video game guy approaches.

EXCUSE ME, DO YOU KNOW WHEN INSERT LOSER VIDEO GAME NAME HERE IS COMING OUT?

Yes, this guy left one employee and approached my cashier to ask him this all important question. The cashier had no idea.

I literally had to hug my arms to myself to keep me from punching nerd guy out.

GET A CLUE!  WE ARE HAVING A NUCLEAR MELTDOWN HERE!  WHO GIVES A SH*T ABOUT YOUR STUPID VIDEO GAME?!

I obviously did not yell this externally.  But internally I did and I gave him his own special death stare.

I will try and work on my internal anger issues.  Externally, I'll forever remain cool and composed. 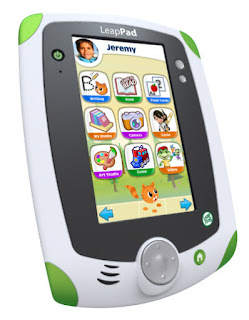 This better be the greatest present ever.
Big E leapfrog Toys r us