November 27, 2012
This morning we met some friends at our local mall to escape the nasty fall weather.

Big E used the bathroom as we were finishing up lunch.  It wasn't a code red emergency, so I was thankful.  Normally we end up racing to the bathroom like we are on an episode of Supermarket Sweep.

As Big E and his friends were climbing in and out of all the coin operated vehicles, I saw him grab his bottom.

Panic bubbled up in my throat.

BIG E, DO YOU NEED TO GO TO THE BATHROOM?!

He did.  And, even worse, it was a poo-mergency.

We were located dead center of the mall with restrooms located on each end of the mall.

I scooped Big E up, as I felt running would not help his cause, and took off.  I slowed down to ask a woman working at the cookie kiosk where the closest bathroom was.

Sweet lord, I had to run all the way down to the end AND down an escalator.

At that moment, I pictured myself as the Incredible Hulk.  Big and muscle-y and green and mad.  Carrying a limp body.

I was also wearing knee high boots, skinny jeans and a jacket.  I had not dressed appropriately for my mall jog.  I was sweating my a** off.  My main goal, at that moment, was not to look like a hip, mom-on-the-go, but merely to keep Big E from having a bowel movement on the industrial mall carpet.

In case anyone was curious why I was sprinting through the mall, Big E made sure to broadcast his intentions to all who would listen.

As we hit the top of the escalator I had to stop to compose myself.  I have a minor fear of falling down an escalator, so I had to make sure I could hold Big E and grab the railing.

I'm happy to report that we made it to the bottom AND the bathroom.

I've said it before, but I'd like to reiterate it.  I DO NOT get paid enough for this job.  In fact, I should be receiving some sort of combat pay. 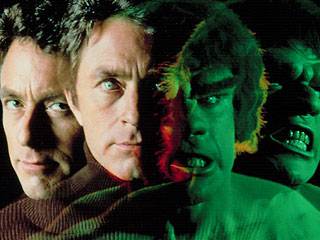 By the way, this show scared the crud out of me as young child.
bathroom emergency Big E Incredible Hulk mall mommy blog