Little E: The Tracks of His Tears

November 30, 2012
Little E had to have his blood drawn this week to rule out some underlying possible causes for his chronic hive situation.

To say I was apprehensive about taking Little E to get stuck with a needle was an understatement.  The kid bursts into tears whenever we enter any room that resembles a doctor's office.  He went bat-sh*t crazy at the vet.  Poodle Yoy on the other hand, was the calmer of the two and she even nervous pooped on the floor.

They ushered us right back when we arrived.  I signed away both our lives and the nurse asked me to sit in the chair and then pull Little E up onto my lap.

I'm not going to lie.  I'm a wuss.  Right after I had my babies I had lost some of my wussiness.  After going through a chunk of unmedicated labor, my pain threshold went through the ceiling.

Novocain for pulling teeth?  FOR THE WEAK, I SAY!

But two years out, I've reverted to my old self.  I held Little E close to me.  I pinned down one arm.  The nurse pinned down the arm the blood was being taken from.  Another nurse jabbed Little E's doughy arm with the needle.  I closed my eyes and looked away.

He let out an instant scream.  But, surprisingly, it subsided as fast as it had arrived.

I let out a huge sigh of relief.  This was not going to be a bloodbath, literally.

Little E was very interested in what was going on.  Maybe he'll be a doctor!?

Sweet, my kid thought the vials of his blood were paint.  Maybe he won't be a doctor!?

And then it was over.  The nurse pulled out the needle and bandaged up his arm.

And then I heard the last words I wanted to hear.

SHOOT, I NEED MORE BLOOD FOR THE LAST TEST ORDERED.

I tried to keep my cool, but I really wanted to rip this lady's head off.  Whatever happened to attention to detail?  Especially when you are working with a two year old.

She had to go back in.  This time it would be on the other arm.

He again cried momentarily but was then distracted by the sink, the kleenex, and the soap nearby.

Again, it was over.  At least the blood portion of our program.

The next part gave me the best laugh I've had in a really long time.

I needed to collect a urine sample from Little E.  And he's not potty trained.  She gave me this contraption that I have to stick to his boy parts and it is attached to a plastic bag.

She actually gave me three in case the first try doesn't work out.

First try, my a**.  I guarantee this will not happen.  I'm better off stripping him down and following after him with a cup.

Anyway, if you happen to encounter a toddler with heroin track marks on his arms and some weird catheter bag thing happening, don't be alarmed.  It's just Little E. 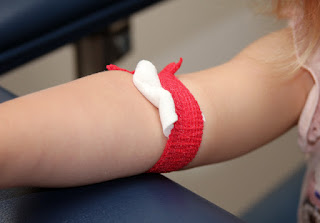