November 23, 2012
I'm forever second guessing my parenting abilities.  Am I rearing wonderful human beings or are they both going to be serial killers?  I guess I'll know in about 15 years.

In the meantime, I find solace in other parents' obvious lack of judgement.  At first read, I sound like a royal b*tch, but really it is deep rooted in my insecurity as a mom.

On our way home from Thanksgiving dinner, we made a pit stop.  Mr. Yoy decided it would be awesome to check out all the Black Friday maniacs.

We swung by Best Buy a little before nine.  The line was tremendous.  People were camped out.  I've seen such madness on the news, but to witness it in person was amazing.

As we slowly cruised by and stared at all the people two things struck me.

1)  There were more people in line to buy a door buster then when I voted for president a few weeks back.  Sad.

2)  There was a mother sitting on the sidewalk with her infant in a bouncy seat and she was bouncing the sh*t out of this baby.  It wasn't freezing cold, but it certainly wasn't the best place for a baby.

I had a moment.

I may not be the most patient, loving mother on the planet, but at least I didn't drag my newborn out to buy a $39 blue ray player.

It wasn't until later that I learned that Best Buy didn't open until midnight. 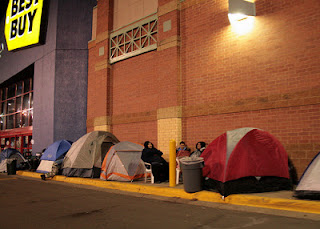