March 25, 2013
I have recently introduced board games into Big E's activities syllabus.

I have to admit, I'm astonished by the amount of cheating that Big E attempts to pull-off.

Look, I love to cheat.  I used to win many dart games on the bar scene by slyly adding a few extra points to my score here and there.  No one ever caught on to my hijinks and I earned the reputation of being a mean dart player.

So I know a cheater when I see one.

Here are some glaring examples of Big E's indiscretions.

1)  Chutes and Ladders:  Only the ladders apply to Big E.  He chooses to ignore the chutes.  What goes up does not come back down, at least in his mind.

2)  Candyland:  Big E asks to shuffle and go first.  He pulls the first card which is ALWAYS the cupcake or whatever sweet card lands you like six spaces from winning.  I need to teach him more subtle ways to win.

But there is a bigger question looming.  What is driving him to be such a terrible board game cheater?

Tonight, it was revealed to me during Passover Seder.

This kid HATES to lose.

Mr. Yoy hid the matzo for the boys to search out later in the evening.  By hide I mean he left it on the counter just a smidge above their eye level.  We decided not to hard core hide it, as we didn't want this portion of the evening to last all night.

Little E found the matzo with the help of Mr. Yoy.

Instantly, Big E went all Hulk Hogan on us, with the exception of ripping his shirt off, which would have made the moment much more digestible for me.

He grabbed the matzo which was so neatly tucked into its cover and crumpled it up.  Pieces rained down on the floor. He stomped on it, crying.

Poodle Yoy thought she had hit the jackpot.  Until she sniffed out the tasteless crackers.  If she came with a thought bubble, it would read "WHY COULDN'T THEY HIDE THE CHICKEN?"

Big E then decided he would hide the matzo himself and then find it and, therefore, win the game.

In the meantime, Mr. Yoy handed Little E a crisp $20 for his discovery, which he promptly handed over to me.  Which is why, he ends the day as my favorite child.  Yeah, I said it.

Anyway, once Big E had won (in his mind), he settled right back down. 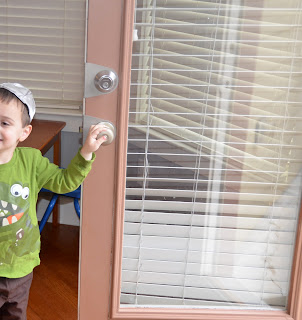