March 18, 2013
DISCLAIMER.  THE MAJORITY OF THIS STORY IS HEARSAY, AS I SPENT MOST OF THE TIME WITH MY EYES COVERED.

Saturday afternoon we took the Yoys over to a local Synagogue to see Lisa Loeb (LL) play music from her plethora of children's albums.  She was in town courtesy of the Atlanta Jewish Music Festival.

Before I dive into the gory details, I'd like to say that LL never ages.  Her glasses may change, but she looks the same to me.  I find this amazing as she has two little kids and I feel that the four years I've spent as a mother has aged me approximately 27 years.

I was pretty relaxed about the show because it would be loud and my kids could be cray-cray, along with everyone else's and all the parents would just lean back and smile and give each other knowing glances.

There was a group of children sitting politely on the floor directly in front of the bimah (stage) where LL was strumming her guitar.  My kids and Cousin Yoy, were not included in this group.  Mostly because I just used the word "politely".

The Yoysers began in the back of the Sanctuary.  Popping up and down from the benches like a punch of crazy moles.  But LL was magnetic and soon a group of kids had gravitated towards her singing.

Up went Big E, Little E, and Cousin Yoy.  Now they were on stage with her.  LL was beyond patient and gracious with her stage crashers.  She engaged them and they were thrilled.

Big E made sure to introduce himself and his brother and give LL a brief family history.  You know, social security numbers, medical records, 401k accounts.  Just the usual shallow and friendly banter.

He paused between songs directly in front of her to dig out a booger and eat it.

I was sweating, purple and hissing at Mr. Yoy to gather our kids.

He was too busy checking the score of the Gator game on his phone.  During Shabbat.  At Temple.

Uncle Yoy made several trips up to the bimah to retrieve all three of the Yoysers. They promptly returned to the stage.

Big E began bimah diving.  Cousin Yoy was busy strumming LL's spare guitar and attempting to open the arc to sneak a peak at the torahs.

My kids discovered the handicap ramp and ran up down like a herd of thundering elephants.

Mr. Yoy kept reaching out and plucking them as they ran by.  But they were so far gone off the deep end, it didn't matter.

And all the while, LL sang away.  She was fantastic!

After the show, I bolted.  I saw many people I knew, but I was so mortified I wanted to hide.

A few side notes:

1)  There were many other crazy children up on stage with LL so I guess it could have been worse.
2)  A big fan of the blog, Miss R., was there and able to witness a blog entry live and in person.  Lucky her! 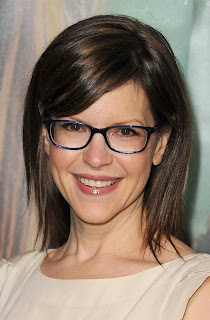 Thanks to Lisa for letting our kids enjoy her music in their own way.