The Ghost of Grocery Shopping Future

April 11, 2013
This afternoon I enjoyed a Yoy-free trip to Publix, courtesy of my amazing mom.

As I leisurely strolled the candy aisle (just eating with my eyes, I swear), I watched two brothers, approximate ages of 9 and 7, bickering about which size marshmallows to buy.  After a few quips back and forth, the boys took their argument up a notch to the supreme court of sibling arguments, their mom.

As I swung up the next aisle, the boys closed in on their mom, who was studying jars of pasta sauce.

And on and on.

She sucked in a deep breath and looked up.  We locked eyes.  I could see the frustration over what is probably a lifelong bickering match between these boys.  I smiled faintly at her.

For a second, I wanted to abandon my shopping cart and hug her.

I also wanted to whisper to her kids to cut the crap or they were likely to get a jar of Prego to the head.

This is my future.

The bickering hasn't really begun, as half of what Little E says is incomprehensible.  But it will happen.  And my ears will cry tears for the hours upon hours of this sh*t I will be subjected to. 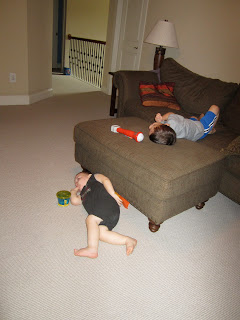