What's With All the Mom Haters?

April 18, 2013
This afternoon, I took advantage of a few Yoy-free hours to return some stuff at the mall and stock up on toilet paper and other sexy stuff at Costco.

Somewhere around the produce department I heard the screams and cries of a very unhappy little boy around Big E's age.  His mother was hightailing it to the check out lane.

This boy was inconsolable.  The mother was amazing.  She was staying composed, which I don't think I could have done.  A mere hour before, I had experienced a Big E mega-balls-to-the-wall tantrum.  They are soul shattering, trust me.  I am still recovering.

For the second time in a week, I wanted to hug a random mom.  She was doing her best.

CAN YOU BELIEVE HER?  SHE IS JUST IGNORING HER SON WHILE HE SCREAMS?

And there she was.  The lady I just LOVE encountering.  MRS. I-HAVE-AN-OPINION-ON-YOUR-MOTHERING-SKILLS-AND-I'M-GOING-TO-LET-ALL-OF-COSTCO-KNOW-IT.

I have encountered this woman before.

Have you?  She makes a snarky comment about you or your kids and it takes every fiber of your being not to slap her.

The sweet grandma in line in front of me was first to defend this poor mom.

HE'S JUST SHOWING OFF.  I'VE GOT FIVE GRANDKIDS JUST LIKE HIM.  THERE'S NOTHING YOU CAN DO TO CALM HIM.  HE'LL BE FINE AS SOON AS THEY REACH THE CAR.

Finally, a voice of reason.

Because it is true.  As a friend once recently described it to me, they have "flipped their lid".  At that point, you just walk away.  Nothing you will say to your raging toddler will matter.

Now this poor woman could not leave her wailing son, but she could choose to not react, which is what every pediatrician will tell you to do.

So, I'm rambling a tad, but I promise my story has a point.

Why must we tear each other down?  Opinions are like a**holes.  Everyone has one.  But that doesn't mean we all want to hear about it.

How about a little compassion for this poor mom?  She's just trying to buy food and her son probably lost his mind over the giant, awesome swing set next to the apples and pears.

I'm sorry that hearing her crying child for two minutes has inconvenienced your day to the degree that you have to let her know.

How about you shove some of those delicious Costco muffins inhabiting your cart in your mouth and move on? 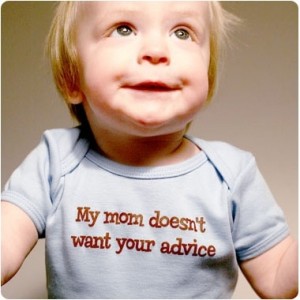